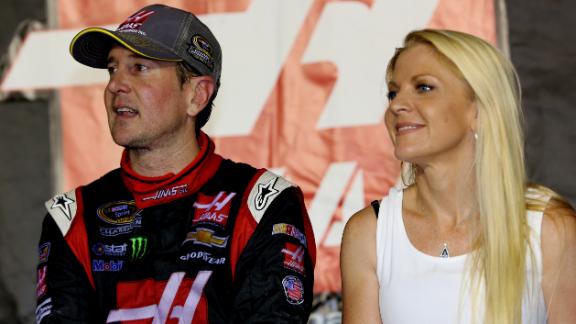 The decision by the Delaware attorney general's office, announced Thursday morning, might not affect Busch in the interim because he is under suspension by NASCAR. The sport indefinitely suspended the Stewart-Haas Racing driver before the Daytona 500 -- a decision that was upheld on appeal -- after a family court commissioner issued a detailed opinion Feb. 20 saying that Busch had committed an act of domestic violence against Driscoll.

"I am grateful that the prosecutors in Delaware listened, carefully considered the evidence, and after a thorough investigation decided to not file criminal charges against me," Busch said in a statement. "I wish to thank my family, friends, fans, and race team who stood by me throughout this nightmare with their unwavering support.

"Thanks also goes to my legal team for making sure that the truth got out and was fully provided to the prosecutors. As I have said from the beginning, I did not commit domestic abuse. I look forward to being back in racing as soon as possible and moving on with my life."

NASCAR hasn't announced the guidelines for Busch's reinstatement but is using a domestic violence expert to help determine his path. Busch has agreed to the NASCAR guidelines.

NASCAR said in a statement that Busch remains suspended.

"He has accepted the terms and conditions of a reinstatement program and is actively participating in the program," NASCAR's statement read. "Kurt Busch's eligibility for reinstatement will continue to be governed by that program and the NASCAR rule book, though the elimination of the possibility of criminal charges certainly removes a significant impediment to his reinstatement."

The decision not to file criminal charges followed a lengthy investigation that began after Driscoll filed a complaint with police Nov. 5. The police completed its investigation in late December, but prosecutors had continued to look into the case.

"While I respect the process, I am disappointed that full justice was not served here," Driscoll said in a statement. "My family and I take a measure of solace in the Order of Protection From Abuse granted by [family court] commissioner [David] Jones, who ruled my account of the facts was the most credible."

The Delaware Department of Justice issued a statement Thursday saying it determined that meeting the burden of proof "beyond a reasonable doubt" would have been too difficult to obtain.

"After a thorough consideration of all of the available information about the case, it is determined that the admissible evidence and available witnesses would likely be insufficient to meet the burden of establishing beyond a reasonable doubt that Mr. Busch committed a crime during the September 26th incident," the statement said. "Likelihood of meeting that high burden of proof is the standard for prosecutors in bringing a case. For this reason, the Department of Justice will not pursue criminal charges in this case."

Mark Dycio, an attorney for Driscoll, said in a statement that police investigators recommended Busch be prosecuted. Busch told investigators, according to a Dover Police Department detective's testimony during the family court hearing, that Driscoll's "head tapped the wall" when he cupped her cheeks.

"Mr. Busch testified in open court that he squeezed Patricia's face, and admitted to police that he slammed her head against the wall in the process," Dycio said. "Given that these admissions establish an assault took place, and that investigators recommended Mr. Busch be prosecuted, it seems impossible that the attorney general's office made this decision on burden of proof grounds."

The burden of proof is different in the criminal and civil cases that stem from this incident.

Spokesmen for the Dover Police Department and the Delaware attorney general's office declined to comment on what police investigators recommended.

"The Dover Police Department conducted a thorough investigation into the allegations made against Mr. Busch and forwarded all of the details and findings to the Delaware Attorney General's Office in late November. We respect the decision made by the Attorney General's office and have no further comment at this time," the statement read.

Driscoll sought and obtained a protective order in family court in Kent County, where the burden of proof was a "preponderance of the evidence" that Busch committed an act of domestic violence.

"Patricia and I are very disappointed that Kurt will not be prosecuted for the abusive acts he committed in September," Driscoll attorney Carolyn McNeice said in a statement. "The AG's decision, however, only makes the order that we received for protection from abuse that much more important.

"As you can see, in some cases, this is the only protection the victim will get. This civil no-contact order is a critical tool for protecting victims."

The hearing on the protective order included two days of testimony in December and two more in January, where Busch and Driscoll testified about what happened that night. Driscoll testified that Busch put a hand on her neck and another on her face and smashed her head into the wall of his motor home three times.

Busch testified that he cupped her cheeks and repeatedly asked her to leave. He testified she entered his motor home uninvited a week after their four-year relationship ended.

Both sides tried to discredit the other, with Driscoll saying Busch had issues with alcohol and depression in the weeks leading up to the incident (he testified that he had not been drinking that night); she also testified about an unreported 2012 assault. Busch said he should have been the one who was afraid and that Driscoll, a defense contractor and CEO of the Armed Forces Foundation, was a mercenary and trained assassin.

"At great risk to my personal and professional reputation, I have spoken candidly, at length, and on the record, to a variety of outlets in an effort to correct the distortions and sensationalism that have unfortunately marked the coverage of this painful time in my family's life," Driscoll said in her statement. "I would urge anyone covering this case to stick to the well-established facts. Giving further air to baseless and discredited accusations about me does a disservice to the public and reduces a serious matter for law enforcement into tabloid gossip."

Busch is appealing Jones' ruling in family court that Driscoll's testimony was more credible, and his attorneys have supplied new evidence that they believe shows Driscoll was lying and that she was out to destroy the career of the 2004 Cup series champion.

The family court decision was enough for NASCAR to act two days before the Daytona 500. Busch, who has 25 career Cup victories, lost both of his Feb. 21 appeals to NASCAR to be reinstated.

"We will continue to exhaust every procedural and legal remedy we have available to us until Kurt Busch is vindicated," Busch attorney Rusty Hardin said Feb. 21. "Along the way we intend to continue to call attention to the facts and witnesses that will shed light on Ms. Driscoll's true character, motivations and history."

SHR co-owner Gene Haas, whose machinery company (Haas Automation) has logos plastered across Busch's firesuit and car, has been a staunch supporter of Busch but has not commented since the suspension.

Chevrolet has suspended its personal services agreement with Busch, although SHR executive vice president Brett Frood has said that wouldn't preclude Busch from returning to the car.

Regan Smith has filled in for the first two races of the season and will drive the No. 41 car this weekend at Las Vegas Motor Speedway.