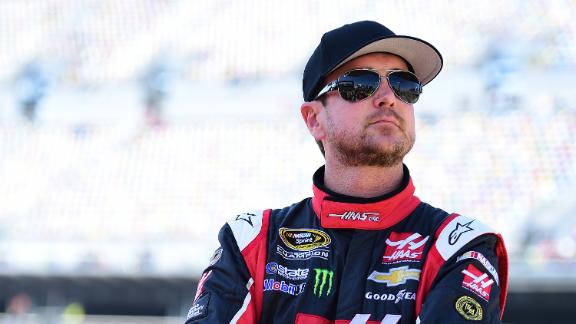 CHARLOTTE, N.C. -- NASCAR lifted its suspension of Kurt Busch and announced Wednesday that he will be eligible for the Chase for the Sprint Cup.

Stewart-Haas Racing executive vice president Joe Custer issued a statement welcoming the 2004 champion back to the team. Busch will return to the No. 41 car this weekend at Phoenix International Raceway.

"We appreciate the steps Kurt Busch has made while following NASCAR's process for reinstatement," Custer said in a statement. "He has taken this path seriously, which allowed him to return to our race team."

Busch missed the first three races of the season. He was indefinitely suspended two days before the Daytona 500 after a Delaware family court commissioner determined that the preponderance of the evidence during a hearing for a protective order showed he committed an act of domestic violence Sept. 26 against ex-girlfriend Patricia Driscoll at Dover International Speedway. The Delaware attorney general's office announced last week that it would not press criminal charges, citing an inability to be able to prove the case beyond a reasonable doubt -- a much higher burden of proof than Driscoll faced in obtaining the protective order.

NASCAR waived the requirement that a driver must participate every race weekend to be eligible for the Chase. Busch, though, will be required to meet all other requirements, meaning he must finish in the top 30 in the standings to qualify for the Chase with a win in the remaining 23 regular-season races.

Busch, who will remain on NASCAR probation, should be able to get into the top 30 even though he currently has no points. After three races, Jeff Gordon is 30th with 42 points.

"As we stated last week, the elimination of the possibility of criminal charges removed a significant impediment to Kurt Busch's return to full status as a NASCAR member," NASCAR executive vice president Steve O'Donnell said in a statement. "We therefore have decided to move him to indefinite probation and waive the Chase requirement. He has fully complied with our reinstatement program during his suspension and the health care expert who conducted his evaluation recommended his immediate return."

Busch will continue with a treatment program, O'Donnell said.

"We have made it very clear to Kurt Busch our expectations for him moving forward, which includes participation in a treatment program and full compliance with all judicial requirements as a result of his off-track behavior," O'Donnell said.

Chevrolet, a major sponsor of SHR, had suspended its personal services agreement with Busch at the time of his NASCAR suspension. While not necessarily required to have that agreement with Chevy to drive for SHR, Busch's deal with Chevrolet was reinstated Wednesday.

"Now that Kurt Busch has been reinstated by NASCAR and is able to fulfill his obligations associated with our agreement, we have lifted our suspension and will continue to monitor the situation," Chevrolet vice president of performance vehicles and motorsports Jim Campbell said in a statement.

Regan Smith filled in for Busch for the first three races. The Stewart-Haas team is 13th in the owner standings and had Smith on the entry list for Phoenix until Busch's reinstatement Wednesday.

"With his reinstatement and the conclusion by the Delaware attorney general to not file charges, our focus is on the future," Custer said in his statement.

SHR driver Kevin Harvick said Tuesday that the team misses Busch's feedback on the race cars. Busch qualified for the Chase last year and was looking forward to this season with crew chief Tony Gibson, who was moved from his role as Danica Patrick's crew chief over to Busch with three races remaining last year.

"Kurt's a car guy," Harvick said. "He understands what's going on with his race car, and obviously at the end of last year they were very competitive and qualifying well and everything seemed to be flowing pretty good as far as information and things that were happening with the cars. ... As we sit in the competition meetings and you hear everything that is going on, there is definitely a piece missing as far as information and things that happen on the racetrack when Kurt's not there."

Busch spent the entire offseason fighting the allegations brought by Driscoll. After two days of testimony in December and two in January in Kent County (Delaware) family court, commissioner David Jones issued an opinion that the preponderance of the evidence showed that Busch committed an act of domestic violence against Driscoll "by manually strangling her by placing his left hand on her throat, while placing his right hand on her chin and face and smashing her head into the wall of his motor home."

Busch, who is appealing the ruling on the protective order, contends that he cupped her cheeks with his hands and repeatedly asked her to leave his motor home. The couple's four-year relationship had ended a week earlier.

Driscoll, who is CEO of a defense contractor as well as the Armed Forces Foundation, said in a statement that she remained committed to standing up for her integrity and "seeking full justice."

"Even though Kurt remains on indefinite probation under this decision, I'm deeply concerned about the message NASCAR is sending by letting him compete for the championship after he was found by a judge to have committed an act of domestic violence," Driscoll said in a statement.

"But I am gratified, at least, that NASCAR's decision comes with the mandatory condition that he follow through on the treatment he so clearly needs. My work with the Armed Forces Foundation on veteran treatment courts has made me a strong believer in the rehabilitation process. But it has also taught me that rehabilitation takes time and can only come after you've taken full responsibility for your actions."