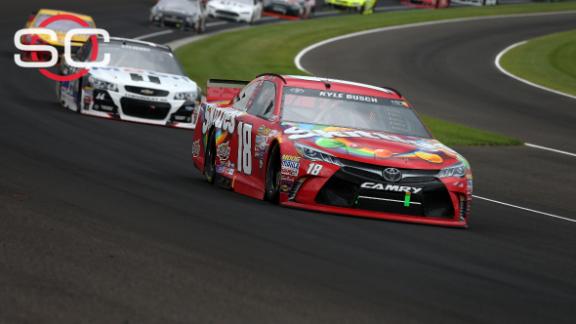 INDIANAPOLIS -- There was no celebratory burnout -- Kyle Busch has done plenty of those the past few weeks -- just another big, fat kiss at Indianapolis Motor Speedway.

Busch's triumphant return following a horrible crash the day before the season-opening Daytona 500 continued Sunday with one of the biggest wins of his career. He grabbed an elusive victory at Indy, where Busch won the Brickyard 400 for a weekend sweep at the historic track.

Busch missed the first 11 races of the season with a broken right leg and broken left foot. He returned in late May and has won three consecutive Sprint Cup Series races and four of the past five.

His latest win was celebrated with the traditional kissing of the Yard of Bricks, where he was accompanied by his wife and son, who was born in May.

"Being away for 11 weeks, it was tough. It was pretty hard times," Busch said. "It was tough to fight through all those things that I had to go through, Samantha had to go through while she was pregnant. She was helping me. All the steps that we went through to get back into the race car were quite challenging.

"But once we've been back, I felt like I just continued right on my stride. This has been a phenomenal return. I won't say phenomenal year because it was a dismal year to start, but I guess I'll take that 11-week vacation any year if it's going to look like this."

Now he has a prestigious Brickyard victory to give him one of NASCAR's elusive crown jewels. His Indianapolis victory ranks alongside his Southern 500 win at Darlington Raceway as the biggest of his career.

"Maybe I found my happy place," Busch said in Victory Lane when asked if he has found a new perspective since the crash.

Busch, who also won the second-tier Xfinity Series race Saturday at Indianapolis, moved 23 points away from cracking the top 30 in the standings. NASCAR granted him a waiver that will make him eligible for the Chase for the Sprint Cup championship should he be ranked inside the top 30 in points.

The win for Joe Gibbs Racing was the first Sprint Cup Series victory at Indianapolis for Toyota, which has now won at all 23 active tracks. Toyota has won the past six national series races dating back to Busch's win at Kentucky, and JGR has won four consecutive poles and four consecutive races.

Chevrolet had entered the race on a 12-year winning streak and had won 16 of the 21 Brickyards. The manufacturer also won the Indianapolis 500 in May with Roger Penske driverJuan Pablo Montoya.

But Penske was denied his first Brickyard 400 win when Joey Logano finished second to Busch on Sunday in a Ford.

"Geez, I guess Kyle's back," Daytona 500 winner Logano said. "It's just so frustrating running second at the Brickyard. Second hurts."

Busch knows that all too well. He finished second in two of the previous three Brickyards.

Five-time Brickyard 400 winner Jeff Gordon had a disappointing day as he crashed on Lap 50. His team spent four laps working on the car on pit road and then 50 more laps in the garage.

He finished 54 laps down in 42nd -- his worst career result at the Brickyard.

"I was side-by-side with Kasey Kahne, and I saw the No. 15 [of Bowyer] get sideways and was just trying to avoid him and we both kind of got loose," said Gordon, who has competed in all 22 Cup races at IMS. "I got loose. The car came around, and it was just everything I could do to try to recover and not hit [him].

"And then it spun around and got into the outside wall and tore up the nose. ... It was an unfortunate way to end it."

Two-time Brickyard winner Tony Stewart was strong early, but strategy backfired on the Indiana native and he finished 28th.

NASCAR used a track-specific rules package Sunday that was designed to improve the racing on a track that has proven incredibly hard to pass at since the heavy stock cars began racing on the Brickyard.

But the low-drag package didn't appear to be much of an improvement as drivers complained all weekend that the turbulence was too strong around their car when they'd close in on another. In the end, there were 16 lead changes among six drivers, and Harvick, who called Sunday's race "a science project," led a race-high 75 laps.

"I think everybody put in a lot of effort to really try to make everything a lot better, spent a lot of money, but I don't know that we accomplished everything that we were looking to accomplish," Harvick said.

Aside from the lack of improved competition, the cars were extremely hot inside the cockpit because the aerodynamic package was trapping air inside. Busch was one of many drivers physically drained following Saturday's race, and Sunday's race seemed to have the same consequence.

This same rules package is scheduled to be used next month at Michigan.

"I got a huge blister on my foot," Logano said. "I think the extended bumper cover on the back of these things doesn't let the air flow underneath the car like it used to without it, and I think it builds the inside temperature up. I've got sweat in my eyes.

"It's just too hot inside those cars."