Kyle Busch not happy with Bristol after banking taken out 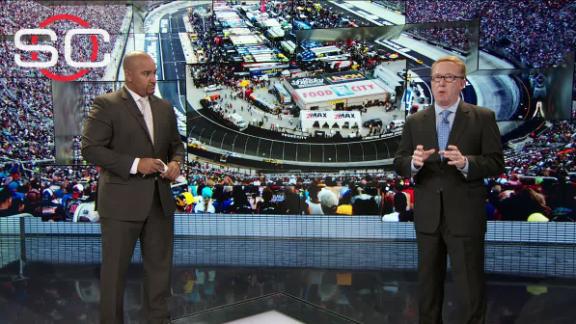 BRISTOL, Tenn. -- Kyle Busch has five career Sprint Cup wins at Bristol Motor Speedway, but to him, those pretty much came at a different track.

Busch has not won at the track since March 2011, and it might not be a coincidence that the track took out some banking by grinding the upper groove of the track in 2012.

The defending Sprint Cup champion -- who came into Bristol for the Food City 500 as the winner of the previous two Cup races at Martinsville and Texas -- crashed twice and was spun once, seeing his race end just 258 laps into the 500-lap event Sunday.

"This track has sucked for me ever since the grinding," Busch said. "I'm about sick and tired of coming here since it sucks to race."

Busch melted a tire bead just 52 laps into the race, was spun on Lap 116 and then crashed for a final time on Lap 259. He had rallied back into the top-10 despite those troubles, which also included a pit-road speeding penalty that sent him to 30th on Lap 192.

He said his car ended up getting too tight just before he crashed and possibly blew a tire.

"That was the weirdest thing I felt all weekend. ... I'm not sure what happened," Busch said.

Busch didn't think the fact that he had to push so hard to pass cars because of the misfortune ended up just being too much for the car or tires to handle.

"Once I got single file there after that last restart, I was just cruising -- I was just riding along," Busch said. "The car felt fine. I don't know why it kept getting tight and it kept blowing right fronts."

Busch's trouble wasn't over even after he left the race, as his car bumped a woman with a camera as it was heading to the garage. The woman, according to a source, is OK and acknowledged she got in the way of the car.