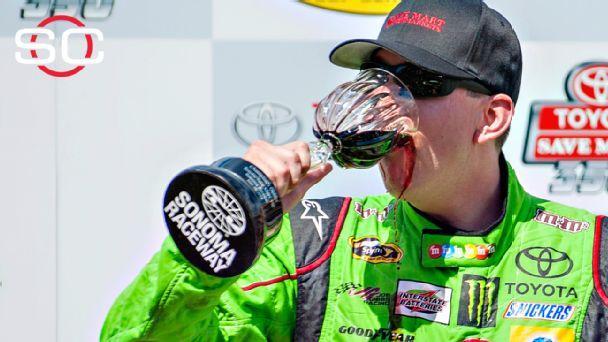 He repeated the routine the night before Sunday's race, all in an effort to minimize pain and give himself the best chance to pick up a much-needed victory.

Just five races after returning from a broken right leg and shattered left foot, Busch made his way to Victory Lane to continue what already has been an impressive comeback. He chased down Jimmie Johnson to win Sunday at Sonoma Raceway for his first Sprint Cup Series victory in 35 races.

The next goal for Busch? Cracking the top 30 in points to earn a berth in the Chase for the Sprint Cup championship.

"Now I don't have to bust my butt and overdrive the car every week in order to get wins," Busch said. "Now I can just concentrate on running top-three, top-five, top-eight -- just getting those finishes and points.

"If we can do that, the points have got to come and fall on the line."

Busch was injured when he crashed into a concrete wall during the Feb. 21 Xfinity Series race the day before the Daytona 500. He missed 11 races but recovered far faster than anyone expected and returned to racing late last month.

NASCAR granted him a waiver upon his return that made him Chase eligible should he qualify, and Sunday's victory is the first step.

But he still must rank inside the top 30 in points to make the Chase. He started Sunday's race ranked 39th in the standings, and the win moved him to 37th, 136 points out of 30th. He has 10 races left to crack the top 30 and heads next week back to Daytona, where his season nearly ended before it began.

To crack the top 30, Busch has to average roughly a 14th-place finish in each of the next 10 races.

"Certainly it's feasible, this team is good enough," Busch said.

"I now I wish I would have gotten up there and moved him."

Busch also praised his little brother's comeback from both his injuries and in winning on a course in which he needed to rely heavily on both legs.

"To have your leg broken, your foot shattered, to never be injured and out of the car ... rehab is very difficult, and it is a mental challenge, and I'm very proud of Kyle for what he's done to get back in the car as soon as he did," Kurt said. "Then to be competitive at a track with hard, hard braking and to use his left foot to drive to Victory Lane, I'm very proud of him."

Busch's win at Sonoma was aided by a terrific restart with seven laps remaining. On fresh tires, he picked his way past five cars and set his sights on Johnson.

Johnson, who did not pit during the final caution, was a sitting duck for drivers on new tires.

He was concerned about not pitting under the final caution when he saw Clint Bowyer lead a pack of cars in for service, but crew chief Chad Knaus remained upbeat on the radio and insisted they were still going to win the race.

But Busch moved through traffic too quickly for Johnson to hang on for what would have been his fifth win of the season. He led a race-high 45 laps.

"I was just surprised how fast they got through traffic and got to my bumper," Johnson said. "Tires were definitely the call, but we had a strategy that we were going to stick to. We were one caution away from it working out just right."

Bowyer finished third and said once Kyle Busch got past him on the restart, his shot at the win was over. Bowyer still notched the first top-five of the season for Michael Waltrip Racing.

Kevin Harvick was fourth, followed by Joey Logano and Johnson.

Tony Stewart was in contention for his first top-five finish of the season, but a poor pit stop during the final caution dropped him deep into the field. Furious with his crew on his radio, Stewart silently collected a 12th-place finish.

Jeff Gordon, from nearby Vallejo, finished 16th in his final race at his home track. The four-time NASCAR champion has a track-record five wins at Sonoma.

"I was really optimistic going into the race," Gordon said. "Nothing's going to take away from this weekend for me. I know it wasn't the finish we all wanted, but it was a very memorable weekend."

AJ Allmendinger, widely considered the favorite to win, started from the pole but was not as fast as expected early in the race and ultimately succumbed to an engine issue. He finished 37th.

"I think we were going in the right direction. It just feels like a swift kick to everything right now," Allmendinger said. "It would have just been interesting the way it played out. There were a couple of spots on the racetrack I was just a little weak that we need to be a little bit better, but I thought it was at least good enough to at least contend." 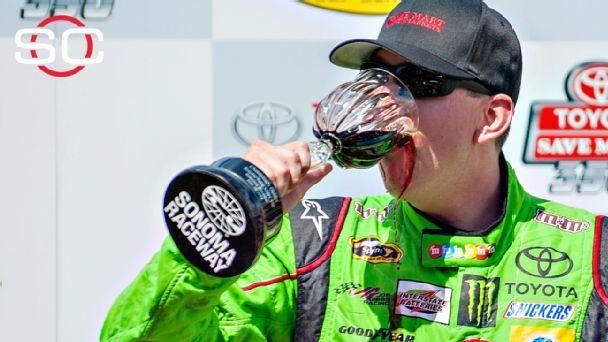