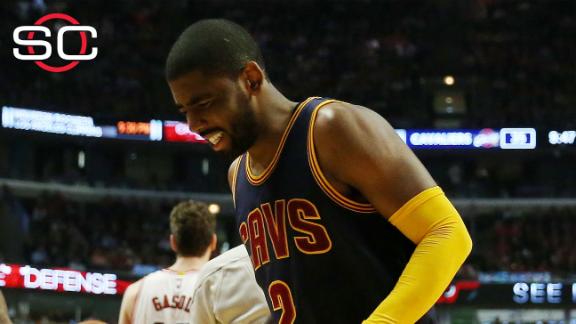 ATLANTA -- The Cleveland Cavaliers may be without star guard Kyrie Irving for Game 2 of the Eastern Conference finals Friday night as he continues to deal with a left knee issue.

Blatt would not say how much time Irving would potentially miss if he does sit out.

"Like most other injuries it's a combination of pain management and what the physical symptoms are, that's all," Blatt said.

Irving is officially questionable as the Cavs await tests scheduled for Friday morning that will likely include an MRI. Irving was unable to finish Wednesday's Game 1 win over the Atlanta Hawks after he aggravated the tendinitis in his knee, which has been bothering him for the past few weeks. Friday's MRI may determine Irving's status for Game 2 and beyond.

Despite treatment on an off day Thursday, Irving's knee had not improved by Friday morning and the Cavs decided to send him for more evaluation. Irving had an MRI following Game 4 of the Cavs' series against the Chicago Bulls and it revealed no structural damage. That peace of mind helped Irving go out and score 25 points in the following game.

But he has tweaked the knee in game action twice since then and hasn't been able to finish the Cavs' past two playoff games. He had 10 points and six assists in the Cavs' Game 1 victory but has largely been reduced to a decoy role over the past two series.

The team doctors believe Irving suffered the injury because he was compensating for a sprained right foot he suffered against the Boston Celtics in the first round of the playoffs last month. Earlier in the week he'd expressed optimism that the time off between series had allowed the tendinitis to calm down.

"This is obviously one of the most frustrating things I've ever dealt with," Irving said after Game 1. "We do days and days and go out there and it's nothing like simulating a game so for me, I just have to continue to do what I've been doing and do whatever is necessary to put myself out there. I'm all about winning. That's the only thing that matters."

If Irving can't go, Matthew Dellavedova will likely start at point guard for the Cavaliers.

LeBron James would also take on an expanded role handling the ball.

"That means less touches in the paint," James said. "If one of our ball-handlers is out, I've got to handle the ball more along with (Dellavedova). It changes my approach a little bit."

Dellavedova played 25 minutes and had zero points on 0-for-6 shooting in Game 1 against Atlanta but performed admirably in Game 6 of the second round against Chicago, scoring 19 pointswhen Irving's injuries limited him to just 12 minutes.

"I'll be ready to go," Dellavedova said. "Whatever the team needs."

Information from ESPN.com's Dave McMenamin and The Associated Press contributed to this report.

Kyrie Irving questionable for Game 2
Dave McMenamin reports the latest on Kyrie Irving, who has been listed as questionable for the Cavaliers in Game 2 of their playoff series against the Hawks. David Blatt and LeBron James also comment on how the team will adjust without Irving.

LeBron says he'll be ready to go for Game 2
LeBron James comments on the status of his ankle and Kyrie Irving heading into Game 2 of the Cavaliers' playoff series against the Hawks.