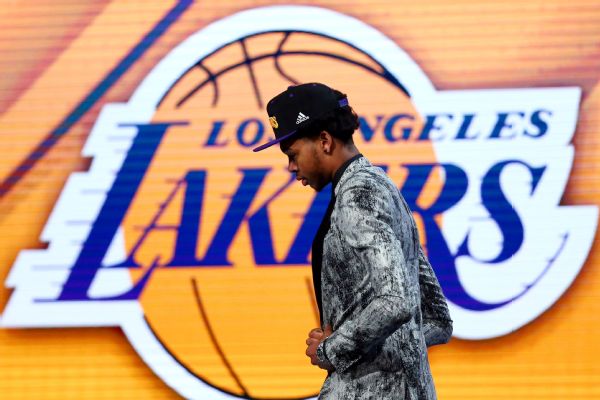 SALT LAKE CITY -- Los Angeles Lakers rookie forward Brandon Ingram, the No. 2 overall pick in the 2016 NBA draft, left Friday's 96-89 loss to the Utah Jazz with a sore right knee and did not return.

The Lakers said Ingram would be re-evaluated Saturday.The Lakers face the Thunder in Oklahoma City on Sunday.

"There's no way we're going to get him out there playing again until we know 100 percent that there's nothing wrong with his knee," Lakers coach Luke Walton said.

Ingram, a 6-foot-9 former Duke standout, said he felt soreness in his knee early in the first half when he tried to run, though he later said his knee is "nothing really serious."

The Lakers initially said Ingram was cleared to return, but he was re-evaluated at halftime and it was determined that he would sit for the rest of the game.

"He said it didn't hurt when he was walking, but when he went back in and tried to run, he said he felt a little something," Walton said. "Whether it was tendinitis or something more, we're not quite sure, but obviously we're going to keep a close eye on it."

Asked whether he planned to play against the Thunder, Ingram said, "Definitely."

Ingram finished with two points on 1-of-2 shooting off the bench.