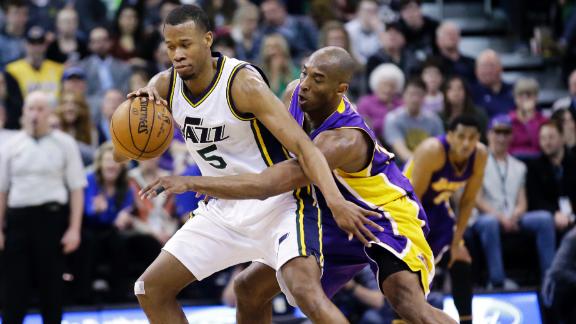 The Lakers also lost by 48 points to the Los Angeles Clippers in March 2014.

Monday's loss, the fourth-worst margin of defeat in the league this season, dropped the Lakers to 15-59. The team is on pace for the worst record in franchise history, behind last season's team, which finished 21-61. In his final game in Salt Lake City, Lakers star Kobe Bryant scored five points on 1-of-11 shooting from the field in 28 minutes.

Bryant finished with a plus/minus of minus-43 against the Jazz, the worst such mark of his 20-season NBA career; however, he seems to have accepted the fate of this Lakers team.

The loss was the worst Bryant played in in his career. He did not play in the team's 48-point loss to the Clippers in 2014.

The Jazz led by as many as 53 points and tied for the largest win in team history.Rodney Hood led the way for Utah, scoring all 30 of his points in the first half. He finished 11-of-13 from the field and 8-of-9 from behind the arc.

The Lakers will face the Jazz again on April 13 at Staples Center in Bryant's final NBA game.

"Any loss makes me pissed off. It doesn't matter if it's one or two points or if it's 48 points. It really doesn't," Scott said. "Any time we lose a game, I'm pretty upset about it, but probably more so tonight because of the fact that, like I said, I didn't think we competed at all."