Lakers' Luke Walton on ejection: 'I needed to stand up for my guys' 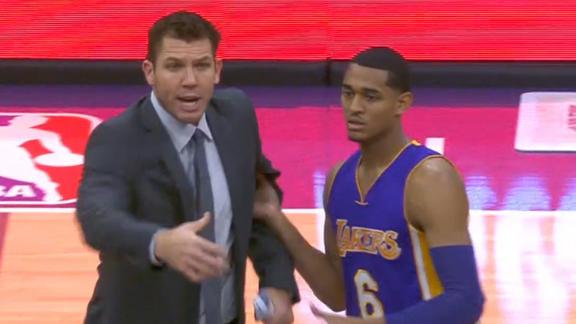 ESPN
By Baxter Holmes
SACRAMENTO, Calif. -- Lakers coach Luke Walton was ejected with 4:14 left in the first quarter of Monday night's 116-92 loss to the Kings after he shouted at the officials following a non-call.

Walton was livid and was restrained by Lakers guard Jordan Clarkson after Kings center DeMarcus Cousins and Lakers forward Julius Randle became tangled up and both went to the court. No foul was called on the play, and Walton immediately voiced his displeasure to the officials before being ejected. He could be seen in replays yelling what appeared to be obscenities in the direction of an official.

Walton said he didn't receive an explanation of that specific play from the officials.

"Like I said, the referees don't matter. The other team doesn't matter," Walton said. "I'm a huge fan of DeMarcus Cousins' game. I thought that it wasn't right what happened out there, so I stood up for my guys, like I will every time."

Walton continued, saying of Cousins, "I don't care that he fouled us. I just care that they decided not to call a foul on that foul."

Lakers assistant Brian Shaw took over for Walton after the ejection.

Randle declined to answer questions about being tangled up with Cousins, but Randle praised Walton.

"Oh, I love Coach, man," Randle said. "Coach, that's my guy. He backs me up with everything. He has all of our backs 100 percent. I love Coach. He has our back 100 percent. It makes you want to go out there and bust your butt for him."

There were seven technical fouls called in the game, six of them on the Lakers.

"I just think there was a new ref out there," Lakers guard Nick Youngsaid. "I think we need to crack down, talk to the league, go from there."

Walton, 36, is the NBA's youngest head coach and is in his first year leading the Lakers after spending two seasons as an assistant coach for the Golden State Warriors.