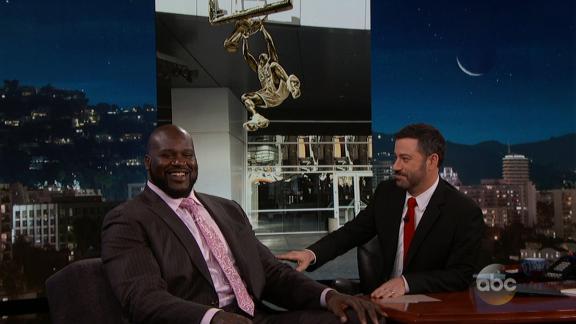 The row of icons outside of Staples Center is getting a new addition: Shaquille O'Neal.

The Los Angeles Lakers announced Wednesday night that they will honor O'Neal with a statue that will be unveiled during the 2016-17 season.

"We look forward to having Shaq join the other legends who have been honored with statues at STAPLES Center," Jeanie Buss, Lakers president and co-owner, said in a statement. "He is a giant not only in size, but also in stature and in what he accomplished as a Laker. Shaq literally broke the ground for the site, and was hugely responsible for not only getting STAPLES Center built, but for making it one of the most successful and famous arenas in the world. It's an honor that is well deserved."

O'Neal was surprised with the news during "Jimmy Kimmel Live."

"Seriously?" he asked repeatedly after Kimmel showed him an artist's rendering of the statue. "That's awesome."

O'Neal also said on the show that if he is elected to the Naismith Memorial Basketball Hall of Fame, he'll likely enter as a Laker. O'Neal is a first-year nominee. Finalists will be announced during NBA All-Star Weekend in February, and inductees will be unveiled in April, with the induction ceremony in September.

O'Neal played eight seasons for the Lakers (1996-2004), teaming with Kobe Bryant to win the championship in 2000, 2001 and 2002. He was the 1999-2000 NBA MVP and the NBA Finals MVP for all three of those Lakers titles, and made the All-Star Game in seven of his seasons in Los Angeles. However, due to O'Neal's souring relationship with Bryant and financial demands and the Lakers' need to rebuild, he was traded to the Miami Heat in July 2004.

The Lakers retired O'Neal's jersey in April 2013, and his statue will join those of Magic Johnson, Kareem Abdul-Jabbar, Jerry West, Chick Hearn, Wayne Gretzky and Oscar De La Hoya outside Staples Center, which opened in 1999.