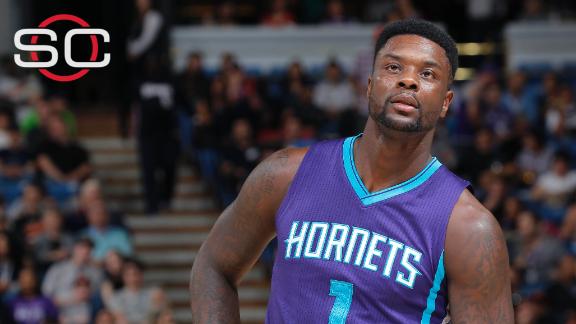 LOS ANGELES -- The Clippers acquired Lance Stephenson on Monday night in a trade with the Hornetsthat sends Matt Barnes and Spencer Hawesto Charlotte.

A similar deal had been proposed last season before the trade deadline but fell apart, sources said.

"We are pleased to add a pair of proven veterans to our team," Hornets general manager Rich Cho said in a news release. "Spencer Hawes is an experienced big man whose outside shooting gives us additional flexibility on offense. Matt Barnes is an experienced veteran who knows the NBA."

Stephenson signed a three-year, $27 million deal with the Hornets last summer that includes a team option for the final year, so the Clippers would be on the hook for only this upcoming season if Stephenson doesn't pan out.

The Clippers have been trying to upgrade at the wing for years, and since they are essentially at the cap now, the only way to significantly upgrade the position is through a trade.

Stephenson, in a statement posted to Twitter, lauded Charlotte, the team and its fans.

Although Stephenson, 24, struggled in his first season with the Hornets, averaging 8.2 points, 4.5 rebounds and 3.2 assists while starting just 25 of the 61 games he played, the Clippers believe he can regain the form he had in Indiana. Stephenson averaged 13.8 points, 7.2 rebounds and 4.6 assists while starting 78 games two years ago for aPacers team that won 56 games and advanced to the Eastern Conference finals.

The Pacers made Stephenson a five-year, $44 million contract offer after the season, but Stephenson, who led the league in triple-doubles with five, felt the offer undervalued him before he turned it down and signed with Charlotte.

The trade was earlier reported by Yahoo! Sports.

"We'd like to thank Lance for his contributions last season," Cho said in the statement. "He was a consummate professional during his time with us."

While a change of scenery might help Stephenson, the Hornets may be hoping the same is true for Hawes, who signed a four-year, $23 million deal with the Clippers last summer.

Hawes struggled through his worst season since his rookie year, averaging 5.8 points, 3.5 rebounds and 1.2 assists for the Clippers in 2014-15.

Hawes, 27, was buried at the end of the bench during the 2015 playoffs, where he was held out of half the Clippers' 14 postseason games and played more than 10 minutes just twice, both coming in blowouts.

Barnes' on-court temper and penchant for getting fined, however, constantly irked head coach and president of basketball operations Doc Rivers, who has been looking to deal Barnes for about two years.