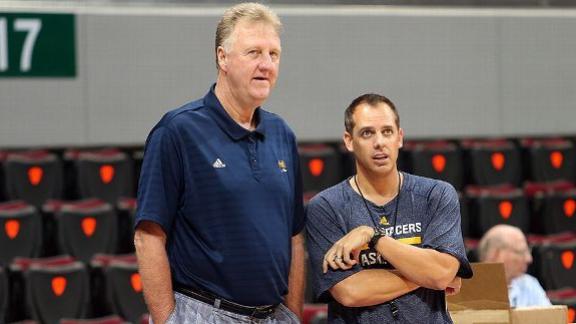 INDIANAPOLIS -- Larry Bird wants Lance Stephenson back with the Indiana Pacers at the right price.

After spending the past week hearing Stephenson roundly criticized for his over-the-top antics with LeBron James in the Eastern Conference finals, Bird said Monday he hopes Stephenson stays with the team, headaches and all.

"I think his ceiling is what he wants it to be," said Bird, the Pacers' president of basketball operations. "I always want him back. You just don't let talent like that walk away if you can help it."

Stephenson will soon be a free agent. He has had no bigger supporter or more important fan than Bird, who took him in the second round of the 2010 draft, but even Bird was unhappy with Stephenson's attempt to play mind games with James.

Before Game 4, Stephenson told reporters that James' trash-talking was a "sign of weakness." Stephenson later walked back those comments, acknowledging he never should have made those thoughts public. In Game 5, Stephenson attempted to listen into Miami's huddle near midcourt, then blew in the ear of James, drawing an annoyed shake of the head from the four-time MVP.

In the series-deciding Game 6, Stephenson tapped James on the chin right after James hit him in the face on a 3-pointer. No foul was called. Later, Stephenson whacked Norris Cole in the head as the two chased a loose ball, resulting in a flagrant foul.

"I was very disappointed that in Game 5, Paul George put on a spectacular display, hit every big shot and after the game, everyone was talking about all the nonsense," Bird said. "That's not what we're about, and it's not professional."

There were times when even Stephenson's teammates got annoyed.

All-Star center Roy Hibbert complained in late March that there were some "selfish dudes" in the locker room, a jab believed to be directed primarily at Stephenson. Hibbert later apologized for airing his grievance publicly. During Indiana's first-round playoff series, Stephenson and teammate Evan Turner tangled during a practice. Stephenson, Turner and coach Frank Vogel all downplayed the significance of the scrap, saying that it sometimes happens in the heat of the moment.

And after Stephenson was ejected from a regular-season game against Miami, Pacers players made it clear he had to show more self-discipline.

Despite all those problems, the 23-year-old Stephenson could be one of the hottest commodities in free agency after posting a league-high six triple-doubles during the regular season and emerging as the Pacers' top penetrator and energizer. That's why the Pacers want him back.

"Clearly, he's a free agent, and I'm certainly hoping that he's back," Vogel said, later acknowledging he played the role of team psychologist more this year than any previous year.

Indiana is expected to start the offseason $8 million to $12 million under next season's projected luxury tax threshold and already has its four other starters under contract. Bird has made it clear that the Pacers will not pay the luxury tax.

All of which leads to one question: What are the Pacers willing to pay to keep Stephenson?

"We've talked about it briefly, but I haven't sat down with the owner [Herb Simon] yet," Bird said. "There's going to be a price and we're not going to go over that."

Bird isn't planning a major overhaul, though. He believes that the Pacers can get more consistent production from the bench and more from the starters, resulting in a team that routinely plays at a championship level.

Still, Bird acknowledged he would listen to trade offers and may contemplate making a deal to get back into the first round of this year's draft.

But the first indication that the offseason plan wouldn't include major changes came when Bird decided to keep Vogel for another season.

"His job was never in jeopardy," Bird said, fidgeting in his chair as he addressed the rumors about Vogel's job security. "The day it [the report] happened, I went down to Frank and all of his assistants and said, 'I want you back next year,' and that was the end of it for us."

The bigger concern is trying to figure out how to deal with Stephenson -- on and off the court.

"When it comes down to it, it's up to him," Bird said about Stephenson's decision. "[Once he matures] his game is unlimited."

Bird: Vogel's Job Never In Jeopardy
Larry Bird discusses the decision to bring back Pacers coach Frank Vogel for a fifth season. Vogel discusses being eliminated by the Heat and areas where the team needs to improve.

Big Changes Coming For Pacers?
Stephen A. Smith discusses the next step for the Pacers after losing to the Heat in the Eastern Conference finals and how Lance Stephenson's antics may have cost him.