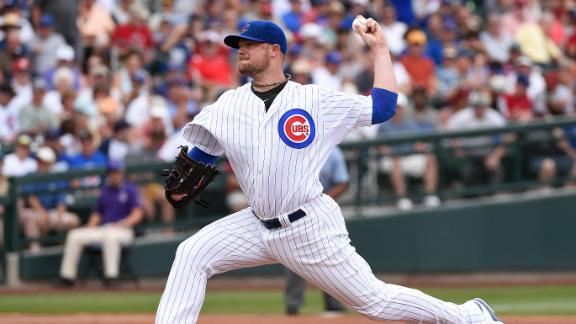 The Chicago Cubs are a longtime running joke among Las Vegas bookmakers: "You know how many casinos have been built on bets on the Cubs to win the World Series?"

Vegas is once again poised for expansion.

Heading into the opening week of baseball season, more money has been bet on the Cubs to win the World Series than any other team at two of Nevada's largest sportsbooks.

The Cubs are 6-1 to win the World Series at the MGM. Only the Washington Nationals, at 5-1, have better odds. The number of bets on the Cubs more than doubles any other team in the MGM's World Series futures pool.

"Every year, they bet the Cubs," Jeff Stoneback, assistant manager at MGM race and sports. "I could be their ace and you could be their No. 2 starter, and they'd still bet them."

The Cubs haven't won the World Series since 1908. But with the offseason additions of manager Joe Maddon and ace starter Jon Lester, bettors believe this is their year.

In October, William Hill opened the Cubs at 40-1 and promptly took a $1,000 bet. The Cubs are now 10-1 at William Hill, where 10 percent of the total amount wagered on the World Series odds is on Chicago.

The second most popular team in Vegas? The Seattle Mariners, who, along with the Los Angeles Dodgers, are now 8-1 at the MGM. After just missing the playoffs last season, the Mariners have attracted the second most bets behind the Cubs at MGM and William Hill.

The Nationals are the consensus favorites, though. At the Westgate SuperBook, Washington is a commanding 1-5 favorite to win the NL East.

The Boston Red Sox are the co-favorites, at 12-1, with the Los Angeles Angels in the American League. The Detroit Tigers (7-4) are the favorites in the AL Central.

The Colorado Rockies (80-1) have the fewest bets to win the World Series at the MGM, but are within bets of overtaking the Houston Astros (125-1) and Arizona Diamondbacks (125-1), Stoneback said.

The loss of Texas Rangers starting pitcher Yu Darvish caused the largest injury adjustment on the SuperBook's season-win totals. The SuperBook opened the Rangers' projected wins at 79.5, before it was announced Darvish would undergo season-ending Tommy John surgery in mid-March.

"He was a three-game adjustment," Ed Salmons, oddsmaker at the SuperBook said. The Rangers' win total now sits at 76.

Bettors have backed the Baltimore Orioles and Kansas City Royals to eclipse their season win total. The Orioles' projected wins have been bet up from 81.5 to 83.5. The Royals' win total has grown from 79.5 to 81.5.

"The public is in love with K.C.," Salmons said. "All last week, the first week of the NCAA tournament, all I heard was 'Orioles over,' 'Royals over.'"

Miami Marlins slugger Giancarlo Stanton, at 6-1, is favored to lead the league in home runs at the SuperBook. But a Cub attracted the largest bet on the home run title odds. Last week, a gambler at the bet four figures on Cubs rookie Kris Bryant hitting the most home runs in baseball this season. The odds were 30-1. Bryant was sent down Monday.