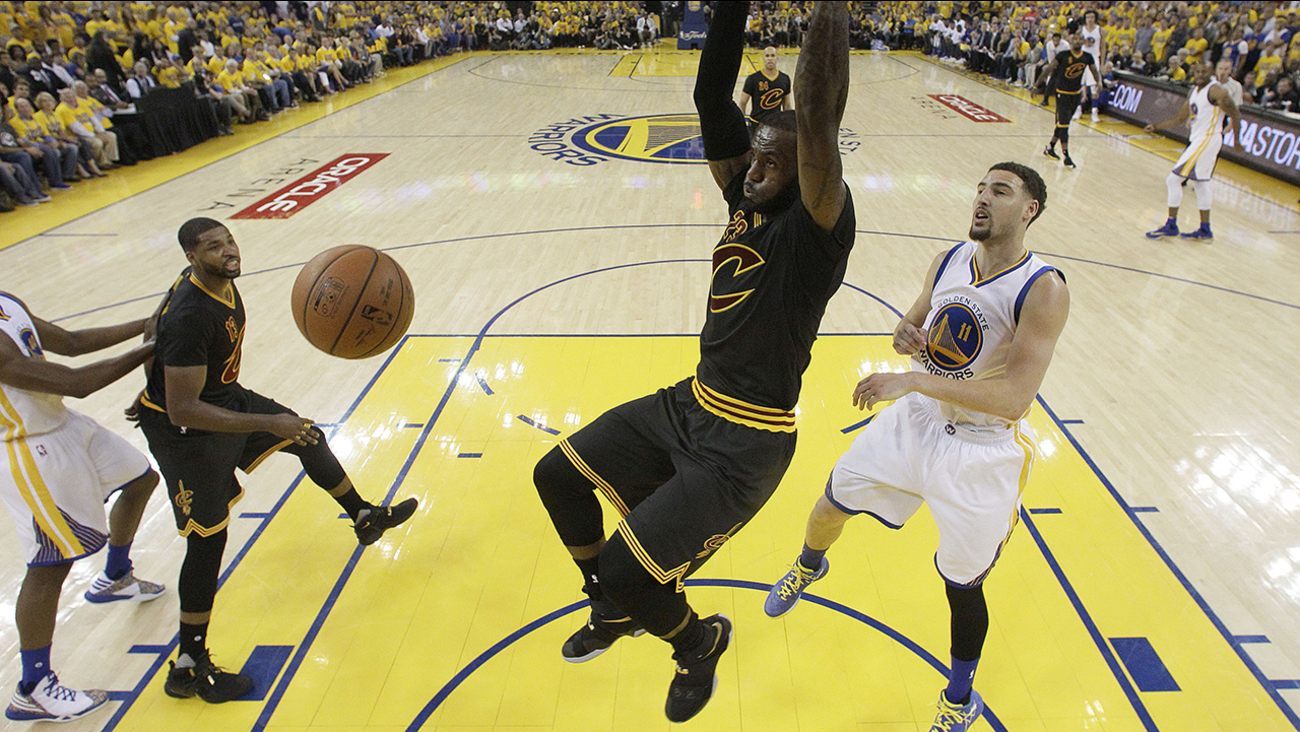 OAKLAND, Calif. -- With 333 of the 336 regulation minutes through seven games of the NBA Finals in the books, the Cleveland Cavaliers and Golden State Warriors were tied 699-699.

LeBron James kept the Cavs alive with a late chase-down block and Kyrie Irving put them ahead for good with 3-pointer with 53 seconds left, to vanquish the championship curse of Cleveland once and for all.

And the Cavs, at long last, were on top of the basketball world. It's a championship 52 years in the making.

One that was won by the Cavs, but one that was made all the more meaningful by decades of losing seasons from Cleveland's Browns and Indians, as well.

It took a native son -- the most important draft pick in franchise history 13 oh-so-lucky years ago, born and bred just about 30 miles down the road, in Akron, Ohio -- to break the cycle of disappointment.

N'East Ohio native LeBron James in tears as he lifts the #NBAFinals trophy and brings his home a championship. #Cavs pic.twitter.com/1yJecW2wkG

If back-to-back titles in Miami were James' breakthrough as one of the game's all-time greats, the championship in Cleveland represents his ascension to living-legend status.

Forget The Shot, The Drive, The Fumble. The Land now has The Comeback thanks to The King.

His NBA Finals record still stands at a lopsided 3-4 -- not nearly as stellar a bullet point on his résumé than the four MVP awards and top-five ranking in all-time playoff points, assists and steals -- but that third ring carries so much weight.

Hundreds of players have won the NBA title before, but nobody has ever done it quite like James and the Cavs did this year.

James dominated the series, pushing it to an improbable brink with back-to-back 41-point games in to bring Cleveland back from a 3-1 deficit. The first 32 teams to fall down 3-1 in the Finals ended up losers. The Cavs, led by a certain No. 23, made sure that streak ended when it came to 33.

A win by the Warriors would have solidified their place in the discussion of the greatest team ever. James' performance in the series changed the conversation and steered it toward consideration for him as the greatest player ever.

He did it, of course, on the same court as the league's back-to-back MVP in Stephen Curry. Only anyone watching could see by James' play that when everything matters the most, he remains the best the sport has to offer, with Curry still a level below.

And he did it by elevating a group of teammates like Kyrie Irving, Kevin Love and Tristan Thompson -- with a combined zero playoff games between them before James came back to Cleveland -- to the game's zenith.

As he famously posted in his homecoming letter in the Players' Tribune, "In Northeast Ohio, nothing is given. Everything is earned. You work for what you have."

James and the Cavs outworked and outlasted the greatest regular-season team.