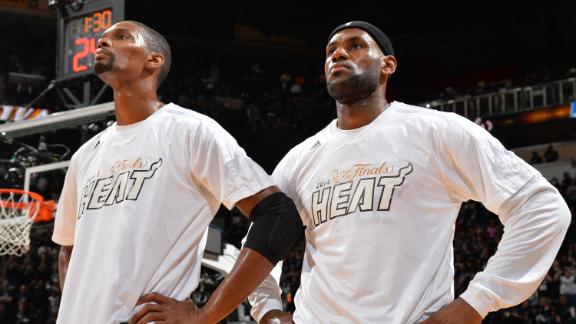 RIO DE JANIERO, Brazil -- LeBron James said he found some recent comments made by his former Miami Heat teammates surprising and he has no plans to spend time with any of them while both teams are in Brazil.

Earlier this week, Chris Bosh said he hasn't spoken with James since James left for the Cavaliers in July, though he later clarified and said they spoke at Dwyane Wade's wedding in August. Also in a recent interview, Wade said he didn't have fun last season, James' final one as his teammate.

"I know a lot of words have been coming out of their camp as of late and some of it is surprising," James said Friday after Cleveland's practice. "We've got so much history together. ... It doesn't take away from what we accomplished [in Miami] and I know that."

"I've talked to D. Wade. Obviously, I haven't talked to Chris. But I haven't seen them," James added.

James has attempted to maintain a relationship with Wade and he spoke to Mario Chalmers just before the start of training camp.

But this week in Rio the teams are actively trying to avoid each other. They are staying at nearby hotels but, despite having three off nights before Saturday's preseason game, aren't making plans to see each other.

"We'll see each other on the court," Bosh said. "That's plenty of time to catch up."

Bosh: Love Will Need To Adjust To LeBron's Game
Brian Windhorst discusses Chris Bosh's comments that it was "frustrating" to learn how to play alongside LeBron James.