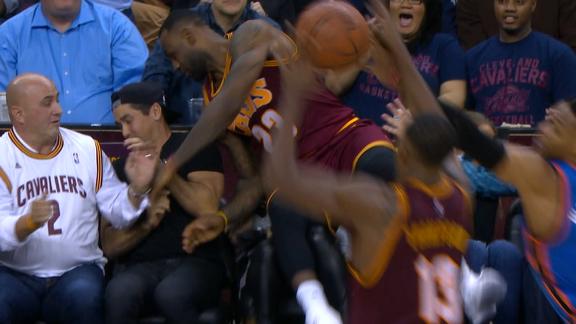 CLEVELAND -- LeBron James tumbled into the wife of star PGA Tour golfer Jason Daywhile chasing a loose ball Thursday night, causing her to be taken from the floor by stretcher and to a local hospital.

James, who is listed at 6-foot-8 and 250 pounds, crashed into Ellie Day, knocking her chair over and landing on her as he fell out of bounds with 5:00 left in the fourth quarter of theCleveland Cavaliers' 104-100 win over the Oklahoma City Thunder.Play was halted with 3:07 left after Cleveland called a timeout, and James returned to the scene to check on Day.

Day was taken to a hospital for treatment. She was released early Friday morning, a spokeswoman said.

Jason Day's agent later said in a statement that Ellie Day was suffering from concussion symptoms and resting comfortably. Bud Martin added that Ellie Day had no hard feelings toward James, quoting her as saying, "He was just doing his job. Go Cavs.''

Day was down for several minutes while she received medical attention, which included having a brace placed around her neck and head.

James said that when he checked on her she had squeezed his hand. He was told she was "doing great."

Day was alert and talking as her husband accompanied her to an ambulance before she was taken to MetroHealth Medical Center.

"It wasn't anything out of the usual besides the injury," James said. "But to me, obviously her health is very important, and hopefully she's doing well. The guys told us she's doing great now. So, but you know, I was going for a loose ball. Just trying to keep the possession going, and I hate that that was the end result of it."

The Days were sitting in a section of seats at Quickens Loans Arena in the first row next to the Thunder bench. Known as the "Nicholson seats," after the position Jack Nicholson often sits in atLos Angeles Lakersgames, the seats are several feet below the playing surface. James fell down onto Day, who was seated next to her husband, and knocked over her seat and landed on her.

James hit his head as he fell into the aisle behind the row of seats.

He tweeted well wishes an hour after the game.

Jason Day, 28, who won the PGA Championship in August, has attended several Cavs games recently and had taken part in a promotion during a timeout shortly before the incident. As fans cheered, the Australian chipped foam basketballs into the crowd.

The Days have a home in Westerville, Ohio, outside of Columbus.

The incident didn't sway James' feelings on the proximity of the seats.

Cavs coach David Blatt said he was unaware of the severity of the incident. He said he has long been nervous about the safety of fans sitting so close to the action.

"Honestly, the only thing I saw was LeBron diving for the ball to save the ball," Blatt said. "I kind of got blocked and just saw a sea of bodies. We all hope that she's OK. It's always concerned me, the sideline seats. Always concerned me, because things like that, when you're talking about players of this speed and physicality and effort level, it's not a simple thing.

"The powers that be are the ones that really need to decide how to deal with that. He made an honest attempt at the basketball, that's all, obviously. We all hope she's OK."

James has had dozens of run-ins and close calls with fans sitting courtside in his career. In May during the conference finals in Atlanta, he stopped himself from running into a pregnant woman courtside. He also dodged a pregnant woman in another incident several years ago.

The league recently has taken steps to improve safety, including cutting the number of photographers allowed to sit along the baselines to reduce the risk of contact with players.

Other leagues have had to address fan safety after incidents. Major League Baseball this month recommended extra protective netting for seats near the field after a summer of fans being hurt by foul balls and flying bats.

In 2002, a young fan died two days after being hit by a deflected puck at a Columbus Blue Jackets game. Brittanie Cecil was killed two days before her 14th birthday, a tragedy that led to the installation of more protective netting at NHL arenas. 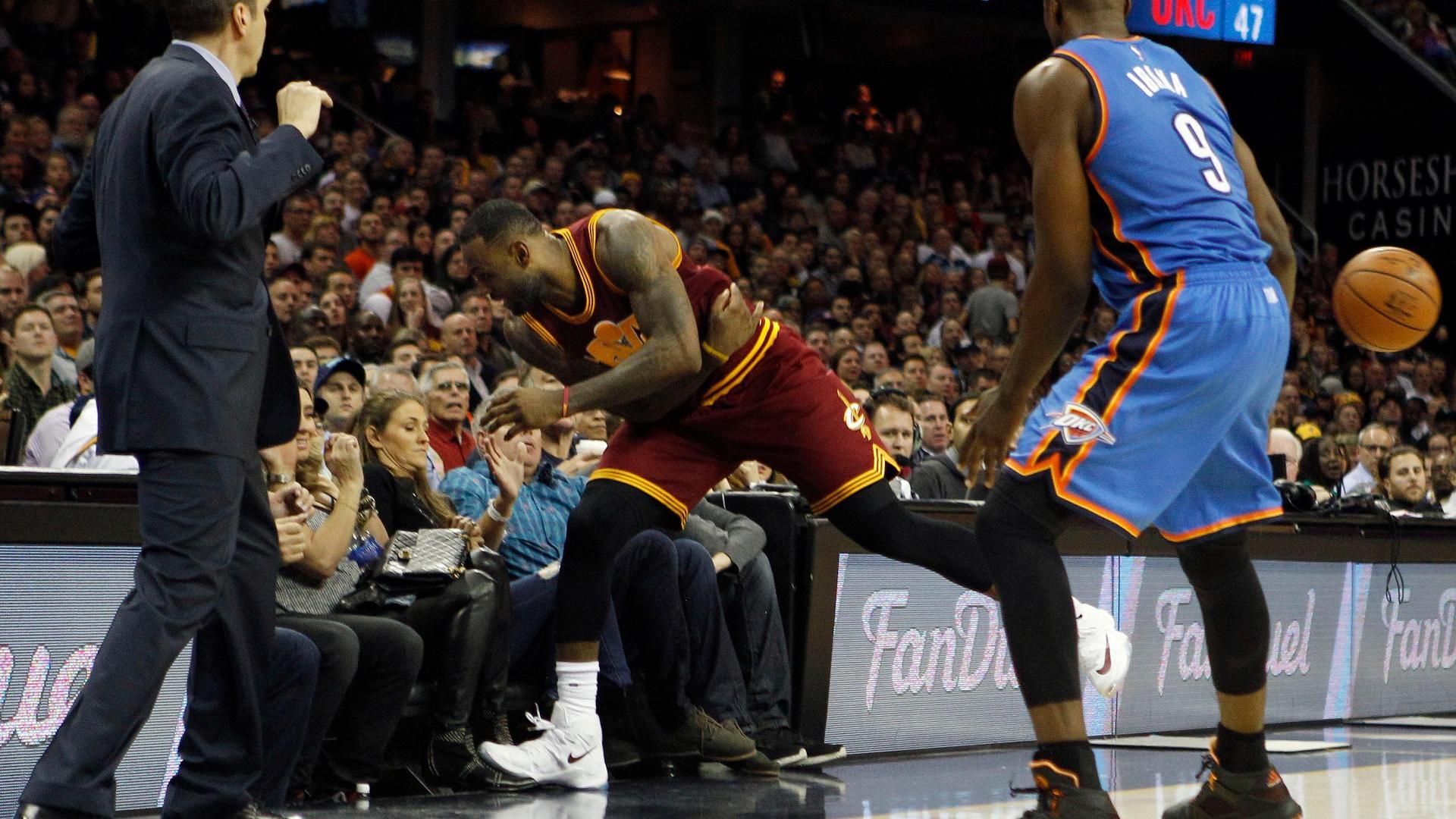