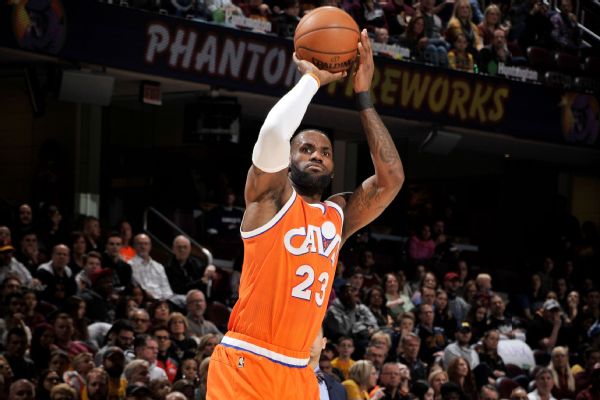 CLEVELAND --LeBron James became the first player in Cavaliers history to score 20,000 points for the franchise in Sunday's game against the Oklahoma City Thunder.

James came into the game needing six points to set the mark. He reached it with 9 minutes, 39 seconds remaining in the second quarter, scoring a layup to give him 20,001 points in his 10 seasons with Cleveland.

He has nearly twice as many points as the Cavs' second-leading scorer, Zydrunas Ilgauskas, who had 10,616 points with the franchise.

"I'm blessed I've played with some great teammates in this uniform the last three years and obviously my first seven in the league," James said. "Those guys set screens for me, they rebound the ball, kick it to me, they work their tails off for me to be able to put up 20,000 as a Cav. For me, I just got to do my part. That's bust my butt in workouts, offseason and practices and see what happens. It's just the teammates I've had have given me assists. Like tonight they block shots and let me get out in transition and assisted me. It's pretty cool."

The Cavs are the 16th NBA franchise to have a 20,000-point scorer in their history. Brooklyn, Charlotte, Detroit, Golden State, Milwaukee, Minnesota, New Orleans, Orlando, Phoenix, Portland, Toronto, Memphis, Washington and the L.A. Clippers are the 14 teams remaining without one, according to ESPN Stats & Information.

James came into the game with 27,913 career points in 14 seasons with Cleveland and Miami, eighth-most in league history.