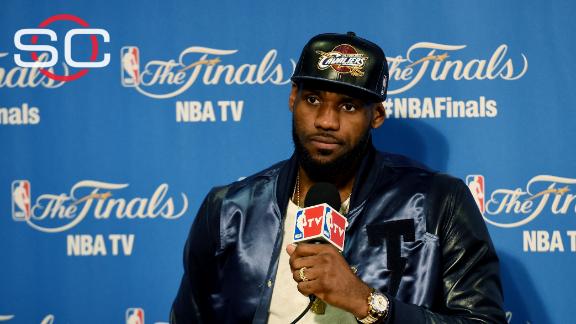 OAKLAND, Calif. -- LeBron James is in the midst of the most prolific postseason play of his career, and he's not afraid to say it.

Although theCleveland Cavaliers are down 3-2 in the Finals to the Golden State Warriors following a 104-91 Game 5 loss on Sunday, James explained why he is still confident about his team'schances: because of him.

"I feel confident because I'm the best player in the world," James said after his 40-point, 14-rebound and 11-assist performance for his second triple-double of the series. "It's that simple."

It was the second time in the Finals that James has puffed out his chest with a braggadocian comment. After he scored 44 points in a Game 1 loss, James rejected the notion that part of the Warriors' game plan was to allow him to rack up points while focusing on his teammates.

James is averaging 36.6 points, 12.4 rebounds and 8.8 assists in the Finals and is only the second player in history to record a 40-point triple-double in the championship round. Jerry Westwasthe other in 1969.

That is especially relevant because some conjecture is already building that James could win the Finals MVP award even if the Warriors close out the Cavs with one more victory. West, in 1969, is the only player from a losing Finals team to win MVP.

James has hinted at a secret motivation he's harboring for this series. Although he has refused to elaborate, one possibility is that he wants to make a statement about the regular-season MVP award. James was third in the voting behind Stephen Curry and James Harden, a fact that sources say rankled him because he believed his body of work this season when he carried a large leadership load wasn't properly considered by voters.

The way he is talking, it seems James might take a modicum of satisfaction if he won the Finals MVP award ahead of Curry, who had a breakout 37-point performance in Game 5.

"LeBron has been tremendous -- [that is] even an understatement for how he's played in the series," Cavs coach David Blatt said. "Under the current set of circumstances, that's what we've got to get, and he's bringing it. You don't see that every day, what he's doing. You've got to take your hat off to him, too."

The Eastern Conference finals was one of James' career best playoff series, as he came up just short of averaging a triple-double for that four-game sweep of the Atlanta Hawks. Over the past nine playoff games, James is putting up averages of 33.7 points, 11.8 rebounds and 9 assists. On Sunday, James scored or assisted on 70 of the Cavs' 91 points.

With that kind of historic output and with his strong commentary, it was not a surprise that James did not lack for confidence when discussing the underdog Cavs' chances to still come back to win the series.

"We're going home with a Game 6, and we've got enough to win it," James said. "We protect home, we come [back to Golden State]. We'll worry about Tuesday first. But if we protect home like we're capable of doing, we force a Game 7."

LeBron: 'I feel confident because I'm the best player in the world'
LeBron James addresses the media after Game 5 and discusses the pressure he is facing with a short-handed team.