LeBron James says of game: 'This is probably the best I've been' 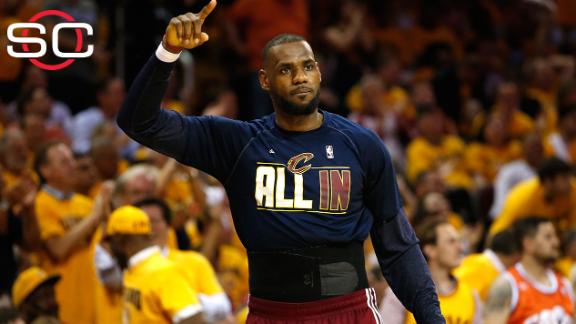 INDEPENDENCE, Ohio -- After racking up four MVPs and two championships through his first 11 years in the league, LeBron James has set some pretty lofty standards for himself to match as he continues his career.

Despite his impeccable past body of work, the 12-year veteran said Monday that he believes he is playing the best basketball of his career right now.

James will play in his fifth straight NBA Finals when the Cleveland Cavaliers open up Game 1 on the road against the Golden State Warriors (Thursday, 9 p.m. ET, ABC) after leading the Cavs through the first three rounds of the playoffs averaging 27.6 points, 10.4 rebounds, 8.3 assists, 1.8 steals and 1.3 blocks per game. He was even better in the conference finals, putting up 30.3 points, 10.0 rebounds and 9.0 assists in a four-game sweep of Atlanta.

"I think it's tough. Was he bouncier at one point? Physically, it's tough to say," Love said. "But as far as up here [mentally], I think he's ahead of where he was. Being able to make everybody around him better, it's a great quality. He doesn't lack that at all. I think he's truly done a phenomenal job with guys going down and helping others to play better."

Others on the Cavs have heaped on the praise this postseason, with James Jones, Kendrick Perkins, J.R. Smith and coach David Blatt all suggesting at some point in the playoffs that James is not only the best player in the game today, but perhaps the greatest basketball player of all time.

"They see me every day, and I happen to be alongside those guys and I'm just trying to do whatever it takes to help our team win," James said of his team's support. "It's great to know when your teammates appreciate what you do and I just try to give it all back to them as best I can."

While James said that he is personally playing the best ball of his life, he was reluctant to rank his overall postseason performance compared with others in his career until he sees how the Cavs finish things out against the Warriors.

"I don't know, I've had some great playoff runs before," James said. "I don't know if this is the top right now, we'll see in less than a month."