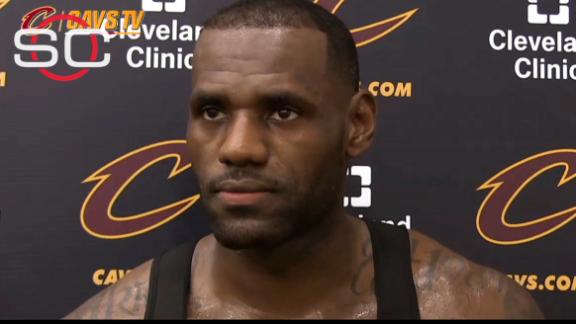 INDEPENDENCE, Ohio -- After dipping his toe into the Tristan Thompson contract negotiations with an Instagram post late Saturday night calling for the Cleveland Cavaliers to "Get it done!!!!", LeBron James dived headfirst into the situation on Sunday.

"It's kind of like the elephant in the room all over, for everybody," James said after practice. "Hopefully some resolve can happen sooner than later. You know, obviously, we continue to say, I continue to say how his value to us is extreme, as we saw last year in the postseason, throughout the season.

"I'm not here to talk about numbers, things of that nature, because that's for them, for both sides to figure out. The last thing you need is a distraction when you try to make a championship run. And we have that right now. And it's unfortunate for both sides that we're going through it right now as a team. It's not an excuse, we will be ready to go but hopefully something happens in the near future."

James and Thompson both attended the wedding of Todd Leebow, a mutual friend, in Miami on Saturday. The pair's agent, Rich Paul, was also in attendance. James said he decided to post his message via social media after spending "the majority of the day" with Thompson.

Last week, James told reporters that he wouldn't be addressing Thompson's holdout ad nauseam. After making his comments Sunday, he said it was "probably my last time" speaking up about Thompson.

"I know he wants to be here, I believe this franchise wants him to be here, and so on and so on," James said. "So, like I said, hopefully something gets done soon so we can really get down to it."

James maintained that his Instagram post was not meant to be a directive aimed solely at the Cavs' front office.

"Throughout the negotiation process, it's always both sides," James said. "It's not just one-sided. I've been a part of negotiation before, and making deals and things of that nature, not much in the NBA but in other businesses, so, it's always for both sides to figure out."

Paul recently vacated a five-year, $94 million max contract demand for his client in favor of a preferred three-year, $53 million deal, league sources said. The Cavs already have tendered a five-year, $80 million offer to Thompson, according to sources.

Beyond taking to social media and speaking to reporters about Thompson, James said he will not interfere any further with the negotiations. Meaning, don't expect him to knock on the door of general manager David Griffin's office.

"I'm not going to go to them and tell them what they should do," James said. "That's their job, they know to do it very well, and they've done that to this point. They've brought in and did what they had to do for us to be a contending team, and, so, obviously Tristan is a big part of that run we want to make. I believe that something will happen."

James continued to express optimism that a compromise will be made, in part because the reality of Thompson's limited options as a restricted free agent.

"It's still early," James said. "It's very unique, like I said, it's a very unique situation. But absolutely [he is optimistic]. I heard there's only two teams that could actually pay him, it's Portland and Philly. I like our chances."

It's been nearly a decade since James last had a teammate go through such a contentious bargaining period. Anderson Varejao sat out until mid-December in the 2007-08 season before coming to terms with the Cavs on a new deal.

It is the only game out of the 911 regular-season games James has played through his first 12 years in the league that he was not in the starting lineup.

James sent home his message one final time before ending his media availability with reporters Sunday.

"Get something done," he said. "Both sides."

LeBron on Tristan: It's an unfortunate distraction
LeBron James says that the contract drama between the Cavaliers and Tristan Thompson is "a distraction" for the Cavaliers.