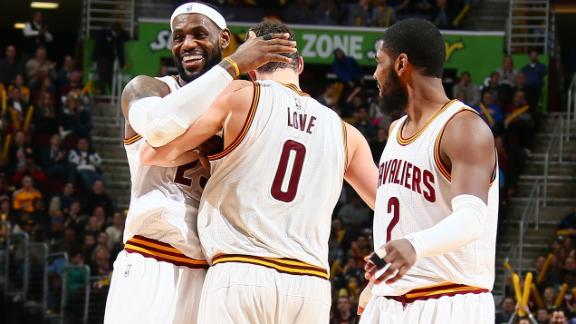 INDEPENDENCE, Ohio -- Ten months have passed since LeBron James and the Miami Heat were bounced by the San Antonio Spurs in the NBA Finals, losing Games 3 to 5 by an average of 19 points.


While James finds himself on a new team on the eve of the Cleveland Cavaliers' playoff opener against the Boston Celtics on Sunday, that Spurs series, as well as the rest of his playoff history, is on his mind.

"I'm 22-7 in the postseason," James said after Cavs practice Saturday. "So I think about every loss I've ever had, every series loss I've ever had, and all those experiences helped me get to this point. So it's definitely a different challenge for me. I'm going in with a much younger team, with a much [more] inexperienced team than I've had the last four years, but I look forward to the challenge."


Two of James' seven series losses have come against the Celtics. Boston got the best of him in Game 7 of the 2008 Eastern Conference semifinals and again two years later in Game 6 of the 2010 East semifinals -- the latter being James' last game of his first stint with the Cavs.


James was asked if facing this season's Celtics squad, with a young coach in Brad Stevens and an up-and-coming roster highlighted by Isaiah Thomas, Evan Turner and Avery Bradley, felt any different than those previous series against a Boston team led by coach Doc Rivers and future Hall of Famers in Kevin Garnett, Paul Pierce and Ray Allen.

"I got the same feelings," James responded, tersely.


Cavs coach David Blatt echoed the same respect for their first-round opponent, despite the sub-.500 record Boston finished with during the regular season.


"They're going to challenge us, no question, and this is not an easy first-round matchup," Blatt said. "Really that's the only thing we're thinking about right now, and that's how to beat Boston. That's where our mind and hearts are, and they certainly are a quality team that's going to make our life difficult."


While James has not hidden his desire to add a third championship ring to his rsum, he won't be heading into the playoffs counting down the 16 wins he'll need over four rounds to achieve that.