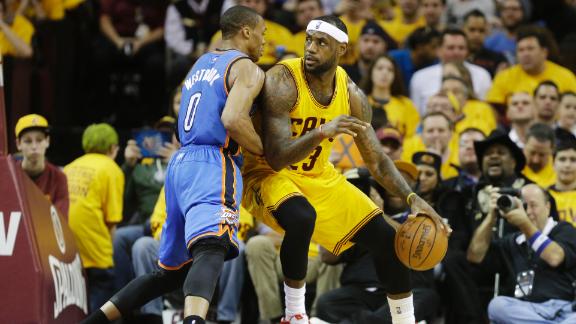 INDEPENDENCE, Ohio -- LeBron James might not have received teammate Kevin Love's endorsement for MVP this season when the All-Star forward was asked to choose between James and former UCLA teammate Russell Westbrook, but he won't try to change Love's mind.

"I don't really think too much of it, really," James said after Cleveland Cavaliers practice on Tuesday. "I don't really get involved in that. I think the voters are going to decide who is the MVP. I think what Russ has been doing, his numbers have been pretty crazy keeping those guys afloat in the West in his play.Steph Currycan make a case, for sure, what he's been doing -- James Harden and myself, as well. So, Kevin has his own opinion of who he believes is the MVP. No one should fault him for that."

Love was a guest on "The Dan Patrick Show" on Monday and was put on the spot to pick either Oklahoma City's do-everything guard or Cleveland's captain for the NBA's most prestigious individual award.

"I would just say because of time spent on the court, you know Bron took those few games off and those couple of weeks off. ... They're both having MVP-type seasons, but I'm going to go with Russell Westbrook because every single night you're looking at his stat sheet, they're fighting for a playoff spot even with Serge Ibaka going down now, Kevin Durant potentially being out the rest of the year and [Westbrook] still going out there and really fighting for his team and them winning and fighting for that seventh and eighth spot in the playoffs," Love told Patrick. "I think Russ is arguably having the better season."

Although James missed eight straight games to rehab strains to his back and left knee in January and has missed 11 games overall this season, Westbrook has missed more games (15) this season because of injury.

Love expanded on his choice on Tuesday when asked whether he was surprised by all the attention his answer caused.

"If you choose to get the little three- or four-second clip," Love said, believing his answer was controversial only when taken out of context. "In my whole answer I said LeBron could very well be the MVP. Steph Curry,James Harden -- those are guys that you alltalk about. You know very well all of them could be named [MVP]."

James and Love were on the same page with one thing at least: Neither mentioned New Orleans' Anthony Davis among the top contenders.

Curry, also appearing on "The Dan Patrick Show" recently, said he would vote for himself or James for the award and added that players should have a say in the voting process, which is currently decided by a panel of approximately 120 media members.

"That's a discussion that needs to be had," James said of players voting for the awards as well. "I think as players we see the guys every single game, we play against them, we know what the after-season awards [should be], and the coaches [do] as well. So, I don't think it would be a bad thing."

James is a four-time MVP. Winning a fifth would tie him with Michael Jordan and Bill Russell for the second-most in league history. Kareem Abdul-Jabbar is first with six.

James said he doesn't judge this season for him based on his previous MVP campaigns but rather on his impact he's made in the games he's played.

The Cavs are just 2-9 this season when James is out of the lineup, so although he's missed more games than some of his competitors, his value has also been proved in his absence.

When asked whether he thought his two-week layoff would affect voters' decisions, James said, "I don't know. I have no idea."

Cavs coach David Blatt, who in January called James an "MVP player in every respect," was asked over the weekend whether he feels compelled to lobby for his star forward.

"I don't feel that I need to campaign for LeBron because his abilities and his performance speak for themselves," Blatt said. "I have spoken out on the subject out of a true belief that any conversation regarding an MVP candidate can't even begin if he's not in that select group because of his performance, not just because of his name. That's the most important thing."

Blatt also said that the MVP award was not nearly as much as a focal point in the leagues he coached in overseas.

"In the European game, there's a lot less talk about it," Blatt said. "It's not something that's constantly gauged and written about or spoken about. First and always it's what the teams are doing in the various competitions that they're playing and then at the end of the day, they decide who the MVP. But it's almost never talked about."