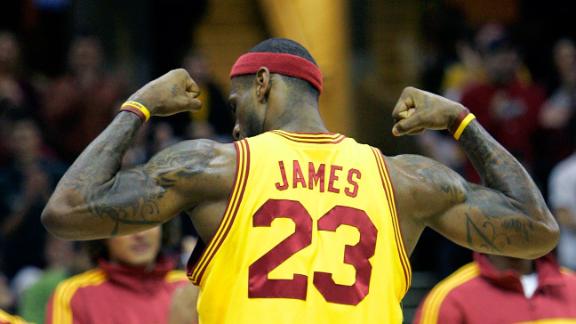 It has been a week since LeBron James announced he would return to Cleveland.

And yet, in those seven days, James still hasn't confirmed for the team what number he will be wearing.

James' website, LeBronJames.com, briefly showed him in a No. 6 jersey, but that was soon replaced. James took to social media Friday to get the input of his fans.

- LeBron James (@KingJames) July 18, 2014Sources have told ESPN that James was also considering No. 32, which he wore his freshman year of high school when 23 wasn't available.

James taking his time means that retailers have to wait on all the orders they've received since last Saturday, when pre-orders for replica jerseys started at $69.99 each. Since then, the Cleveland Cavaliers have offered fans a replica youth jersey ($49), a swingman jersey ($99) and the authentic jersey ($300).

James sold the most jerseys of any NBA player in each of the last two seasons. He has been the best-selling jersey for six of the 11 seasons he has played in the league.

James wore No. 23 from his sophomore year in high school through the 2009-10 season, his last with the Cavaliers.

He changed to No. 6, the number he wore for the Olympics, when he went to the Miami Heat, saying he thought all players should give up No. 23 so that Michael Jordan could be honored league-wide.

The Cavaliers sold out season tickets about eight hours after James made his announcement last Friday. Cavaliers spokesman Tad Carper told ESPN.com that the season-ticket waiting list had topped 2,000 names.

James signed a two-year, $42.1 million contract with the Cavs.

Flashback Friday: LeBron's Legacy
ESPN.com takes a look back at the most memorable moments from the stellar career of four-time MVP and two-time NBA champion LeBron James.