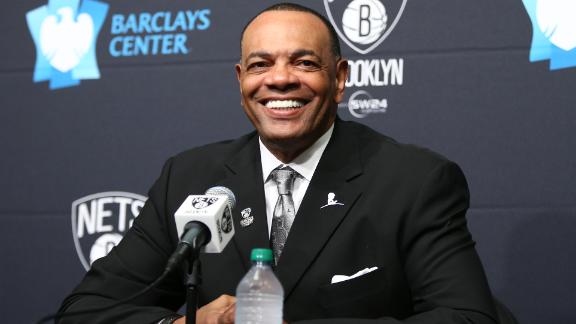 NEW YORK -- His predecessor might have wanted added responsibility, but Lionel Hollins made it abundantly clear during his introductory news conference Monday that he wants to be only the head coach of the Brooklyn Nets.

After Jason Kidd's failed power play and abrupt departure to Milwaukee, it sounds like Hollins is going to bring some much-needed stability to a franchise that has looked quite dysfunctional lately.

"That's all I want to do. I'm a basketball coach. I don't want to do [general manager] Billy King's job. I don't want to do anybody else's job in the organization but the one I'm hired to do," Hollins said at Barclays Center, later clarifying that he was not taking a shot at Kidd or anything.

"That's very important to me. I'm very low-maintenance. I'm actually embarrassed, I drove up to the [arena] and saw the [oculus] with my picture on it. I'm like, 'Come on.' I just want to coach."

The Nets immediately identified Hollins as their top target in their coaching search just days after Brooklyn ownership rejected Kidd's request to add final say in player personnel decisions to his coaching duties. They officially hired Hollins on Wednesday.

Sources told ESPN.com that the Nets and Hollins agreed to a contract that could be worth as much as four years and $20 million if the team picks up his fourth-year option. Hollins called the opportunity to coach in Brooklyn "a miracle."

"Well, it's been a whirlwind," Hollins said. "It's been very hectic, and the first day was literally overwhelming for me. The text messages and phone messages that I had that I couldn't return. I woke up about 6:30 in the morning and I had 13 text messages. And then I had 35, then 60, and then 85, and then I was all the way up to 150 text messages. And I'm trying to get back to people. I'd text one person and they want to text and have a conversation, and then the phone calls started.

"I don't know how many of you had gotten my cell number, but you can best bet it will be changed," he joked.

Hollins is unsure what style he wants his team to play but does want to make sure that his players develop cohesiveness and mental toughness.

"I know that I want to play at a little quicker pace than they even played at, that we played at in Memphis," he said. "But I don't want to run up and down the court and jack up shots. I want to be aggressive."

Hollins, 60, guided the Memphis Grizzlies to the playoffs in each of his last three seasons at the helm. In 2012-13, the Grizzlies won 56 games and advanced to the Western Conference finals. But Hollins' contract was not renewed after the season apparently because of philosophical differences between himself and ownership.

"Well, it was difficult because it wasn't about coaching at all and it wasn't about analytics. It wasn't about any of that stuff," Hollins said. "The guy in charge wanted to bring somebody else in, and it's easier to sell to a group of fans that are upset because you're firing a coach who's done what we did than it is to just fire him. So they had to do what they had to do there to try and take the sting off, and people that know me know that not a word of what they tried to say about me was true.

"I can be tough, but I can also be sweet. That's everybody. It's not like I'm anything different than anyone else, but the person in charge, he wound up getting fired this year, and it speaks for itself."

Hollins said he was humbled by being away from the game last season as he worked as an analyst for NBA TV and SiriusXM radio.

"I know it's a challenge, but in order to have success you've got to go through challenges and overcome them, and I'm really looking forward to this opportunity," Hollins said.

Hollins is considered an old-school, no-nonsense, defensive-minded coach who gets the most out of his players. In 2012-13, the Grizzlies finished in the top three in the NBA in defensive efficiency, opponents' field goal percentage and rebound percentage.

Hollins proved to be integral in the developments of Marc Gasol, Zach Randolph and Mike Conley Jr. The Nets hope he can have a similar impact with Deron Williams and Brook Lopez. Williams and Lopez are rehabbing from surgery and looking to regain All-Star form.

The Nets flew Hollins into New York a week ago, and he casually dined with King and assistant GMs Bobby Marks and Frank Zanin. Hollins met with King again the next day to talk X's and O's. King spoke with ownership shortly thereafter, and Hollins and owner Mikhail Prokhorov chatted over the phone. King and Prokhorov agreed that Hollins was indeed the right man for the job.

"The one thing that always stood out about Lionel is his teams, they win," King said. "When Rudy Gay got hurt, they won. When Zach got hurt, they won. It reminds me a little bit of [Chicago Bulls coach] Tom Thibodeau in that no matter who is playing, they played a certain way. When we played Memphis, we knew it was going to be a dogfight, his guys were going to play hard. To me, that's a real testament to the coach because he has everybody well prepared and ready to play."

The Nets hope that the hiring and introduction of Hollins allows them to move on from what has quickly become a tumultuous offseason.

In three separate stints with the Grizzlies, Hollins compiled a 214-201 record.

The Nets considered Hollins for their vacancy last offseason before deciding to hire Kidd.

Hollins said he has reached out to candidates about joining his coaching staff. Hollins was also under consideration by the Los Angeles Lakers for their head-coaching vacancy.

"I'm all about who wants me. If they wanted me, then they would've hired me. They didn't. Billy chose to make that decision. I'm here and I'm excited and I'm moving forward," Hollins said.

After all, as Hollins put it, "Two Saturdays ago, this job wasn't even open."