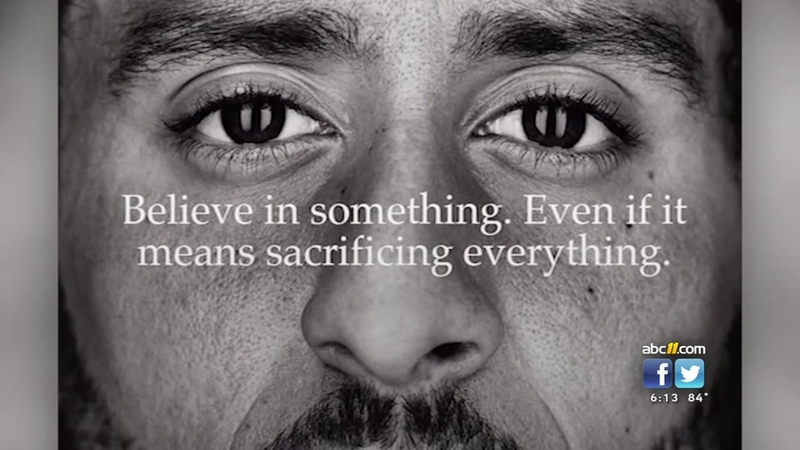 Ex-NFL quarterback Colin Kaepernick is making money moves off the football field as the new face of Nike's popular slogan "Just Do It."

People who disapproved of Nike's campaign posted their outrage on social media. Some doused their Nike apparel and shoes with lighter fluid and set them on fire.

Colin Kaepernick featured in Nike campaign celebrating 30th anniversary of 'Just Do It' motto
"Believe in something. Even if it means sacrificing everything," Colin Kaepernick's new Nike ad reads.

On Wednesday, Hillsborough Police asked its followers on Facebook to donate their Nike's rather than destroying them.

Nike faces backlash for 'Just Do It' ad featuring Colin Kaepernick
Hillsborough police are asking for anyone who is considering burning their Nike shoes, to instead contact them so they can give them to someone in need.

"Usually, people burning their own things they bought, generally is not how a boycott works," Branagan said.

The company and protesters are inserting themselves into a firestorm debate around the American flag, racial equity and policing.

Branagan said he supports Kaepernick and athletes taking a knee during the national anthem and using any platform including Nike to address inequality.

"When they start talking about police brutality, then you inevitably have a white backlash," Branagan said. "And I think that's what the Nike boycott is about."

Nike faces backlash for 'Just Do It' ad featuring Colin Kaepernick
Colin Kaepernick is one of the faces of a new Nike advertising campaign commemorating the brand's 30th anniversary of the "Just Do It" motto, according to ESPN.

Hayes and her wife are not surprised by the boycott.

They wish Nike had chosen a military veteran instead. They consider Kaepernick's sitting and kneeling to the American flag and national anthem inexcusable.

"To disgrace something that covers the whole country and not just him, I feel like they (Nike) could pick somebody else." Hayes said. "Someone who is actually a hero. Not someone who just knelt because he wanted to."

Duke and UNC athletics use Nike products and apparel.

Asked about the campaign, UNC said the controversy has "no impact on our partnership with Nike."