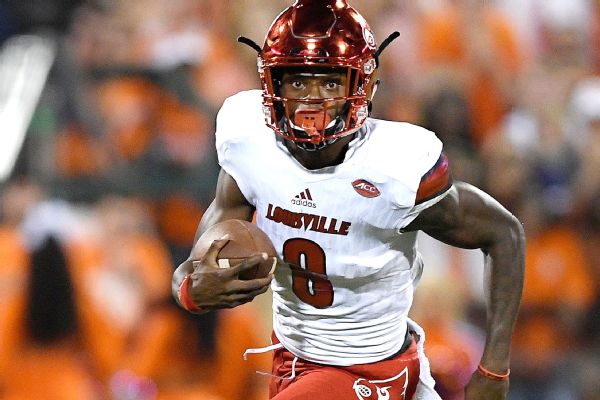 Due to the recent increase in autograph demands of Louisvillestar quarterback Lamar Jackson and other student-athletes, the Cardinals will no longer be allowed to autograph items because of NCAA eligibility concerns.

"We're just being proactive and making sure we protect the eligibility of our players," coach Bobby Petrino said Wednesday. "It's become kind of a hassle up here in our office with everything being sent to our administrative assistant. [Tuesday] I made the decision that we need to get the word out we're not going to have anything more sent to the office for Lamar to sign.

"We had to protect him from people waiting after the Marshall and Florida State game. It's to let him focus and concentrate on being a student-athlete and making sure no one gets to benefit from him signing his name."

There is no indication that Jackson or any other Louisville player violated NCAA rules regarding autographs or has been compensated for autographs, a Louisville spokesperson said. The decision was made Tuesday because the autograph demand of players had increased after the recent success of the football team.

On Tuesday afternoon, Louisville's official football Twitter account indicated the school would no longer accept autograph requests "due to growing concerns over eligibility of its student-athletes."

The increased demand is due to the meteoric rise of Jackson and the Cardinals. Before the season, Jackson, a sophomore, was a 100-to-1 long shot to win the Heisman Trophy. But after only three games, he became the prohibitive favorite to win the award.

Louisville, which started the season ranked No. 19 in the AP preseason poll, climbed as high as No. 3 in last week's rankings before dropping to No. 7 after Saturday's loss at Clemson.

Louisville's autograph ban decision was to ensure none of the Cardinals commit any NCAA violations -- specifically in regard to NCAA bylaw 12.5.2.1, which has sidelined two of college football's biggest stars in recent years.

In 2014, Georgiarunning back Todd Gurley received a four-game suspension from the NCAA for "accepting more than $3,000 from multiple individuals for autograph memorabilia and other items over a two-year period."

In 2013, Texas A&Mquarterback Johnny Manziel was suspended for the first half of the Aggies' opener against Rice for an "inadvertent violation" of NCAA rules regarding autograph signings. The NCAA concluded Manziel didn't receive any money for his autographs.