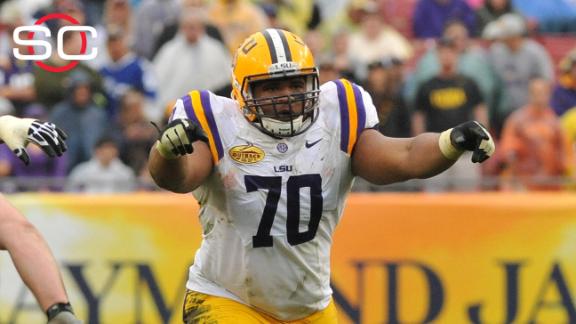 The NFL on Thursday rejectedLSUoffensive lineman La'el Collins' request to be removed from the NFL draft.

Collins asked to pull his name, with the intention of returning to Louisiana to be questioned about the shooting death of a pregnant woman in Baton Rouge. Police said Tuesday that Collins is not believed to be a suspect in her death.

Brittney Mills, 29, was believed to be a former girlfriend of Collins, and though she died in the shooting, her baby was delivered. Police are trying to determine if Collins is the father of the newborn and if he can provide any possible information on Mills' death.

"We have identified where La'el was the day the lady was murdered to establish he was nowhere around," Collins' attorney, Jim Boren, told ESPN. "We have offered to give names, witnesses who can vouch for his whereabouts that day until after the woman's body was discovered. We believe that when [police] have verified that information, that they will rule him out as a suspect in the homicide, just as I believe he should be."

Projected to be a first-round pick, Collins had hoped to drop out of the NFL draft and be entered into this summer's supplemental draft. He is thought to be the first player to try to pull out of the draft on the day of the event.

The NFL has no precedent or procedure for such a move under draft rules; once a player becomes eligible for the draft, there is no procedure for removal.

In fact, draft rules agreed upon with the players' union specify that the draft cannot be bypassed for the supplemental draft.