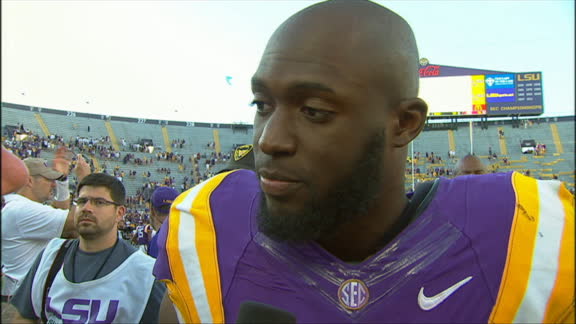 BATON ROUGE, La. -- The NCAA says LSU Tigers running back Leonard Fournette will be allowed to auction his jersey fromSaturday's 45-24 win over theGamecocks, the proceeds of which will go to South Carolina flood victims.

Fournette, whose family was forced to live on a bridge for several days as flood waters overtook New Orleans after Hurricane Katrina in 2005, read a prepared statement during a postgame interview where he announced the auction plan.

"I want to send my prayers, condolences and empathy to the people of South Carolina," Fournette said. "What they are going through reminds me of what we went through, my people in New Orleans, Louisiana, went through 10 years ago with Hurricane Katrina. We played a game today, but the people in South Carolina right now are in need."

The game was moved to Tiger Stadium in light of the flooding in South Carolina.

"I would like to auction off my game jersey as is to the highest bidder to help out the relief efforts," Fournette said. "People of Louisiana not only care, but know firsthand what you in South Carolina are going through."

There had been some question over whether NCAA amateurism rules forbid Fournette from auctioning the No. 7 jersey in which he made history by becoming the fastest to 1,000 yards in a season for LSU, a program that dates to 1893. A tweet by the NCAA affirmed it would be allowed.

LSU had earlier said it believed it could assist Fournette in auctioning the jersey without jeopardizing his amateur status.

"Because of the situation, I think it's possible it could get approval from the different agencies involved with this to donate the funds raised from auctioning his jersey to the relief fund," said LSU senior associate athletic director Miriam Segar, the school's former compliance coordinator. "I think it's a possibility. We just need to make sure we do everything correctly so we can protect Leonard's amateurism."

Segar said LSU administrators appreciated Fournette's offer, but said he did not consult the school's compliance staff before making his announcement.

She said the school will need to consult state agencies -- LSU is a state university, so Fournette's uniform is officially state property -- and NCAA staff to determine the proper channels they must follow if they do auction Fournette's jersey for charity.

"Leonard's gesture is amazing and shows the kind of kid he is and what kind of character he has and makes me very proud that he wants to do that, first and foremost," Segar said before the NCAA's tweet. "That being said, I think it was something that just came from his heart. We as administrators have not had a chance to review what he wants to do.

"A student-athlete can't auction, sell anything related to their name, image and likeness and make money on it. That's the principle of amateurism, basically. I do think we're going to research to see if it's permissible for LSU to assist him in what he wanted to do. ... There's a process in place that we're going to work on on Monday to see the best way to assist him with that."