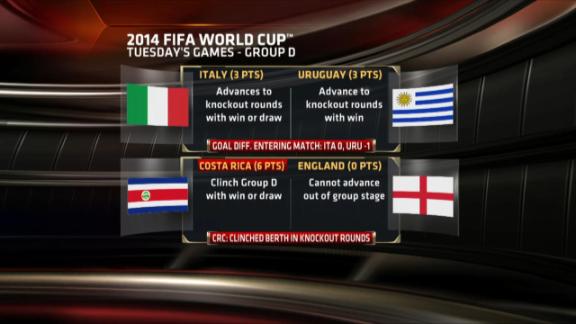 On Monday -- in what seemed like the start of a media campaign to build momentum for a move to La Liga -- the Uruguay and Liverpool striker's father-in-law told Spanish TV the time was right for him to leave Anfield.

Suarez missed Uruguay's first game of the World Cup, a 3-1 defeat to Costa Rica, but returned to score two fine goals in the 2-1 victory over England.

Both Mundo Deportivo and Sport now claim talks between Barca and Liverpool over a move have started, with Real Madrid also said to be seriously interested in signing the 27-year-old.

Gabri told Catalan radio show Esports en Xarxa, in quotes reported by Mundo Deportivo: "[Suarez] has always had in his head that some day he would be there.

"I believe that he would be a great signing for Barca. He would adapt very quickly, very well, and would fit in very well inside the club. Also, he has his wife's family living in Barcelona."

In December, Suarez signed a new contract tying him to Liverpool until 2018, but some reports in Spain suggest he still feels let down by the club's breaking of a promise to let him leave last summer.

The contract is thought to include a release clause, although sources have refused to confirm reports that it would be triggered by a 65 million pound offer, while reports suggest Barca's Chile attacker Alexis Suarez could be included in any deal.

Suarez has claimed he still feels unloved in England and has been "under attack" from the media, despite winning all three domestic Footballer of the Year awards after scoring 31 league goals for Liverpool last season.

Win or go home
The ESPN FC panel weigh in on the battle between Italy and Uruguay in their win or go home match-up.

Azzurri not taking Suarez's threat lightly
ESPN Deportes' Leonardo Bertozzi reports from the Italian camp ahead of their match against Uruguay.

Is Suarez one of the greatest in the world?
Can Luis Suarez be mentioned in the same breath as Cristiano Ronaldo and Lionel Messi?