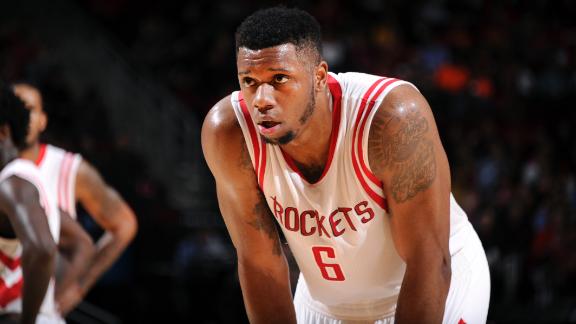 HOUSTON -- The Houston Rockets received a blow to their frontcourt yet again when it was revealed that starting forward Terrence Jones is out for an extended period of time with a collapsed lung. Jones suffered the injury in the first quarter of the Rockets' victory over the Denver Nuggets on Thursday night.

Coach Kevin McHale said Friday that Jones remained in the hospital overnight and will not play for at least the next three games.

"He got hit really hard in the ribs," McHale said. "They don't think he cracked a rib, but he's having a tough time breathing right now."

Considering the seriousness of the injury, Jones could be out for a while.

It's the second time this season Jones will miss significant playing time. He missed 34 games with left-leg nerve inflammation but returned in January and became a productive member of the team. Jones is averaging 12.4 points and 7.3 rebounds per game this season.

"I feel bad," Rockets point guard Patrick Beverley said. "T-Jones worked so hard to get back from his last injury and got stronger. He came out here and gave us the right energy and played well and got back in the starting lineup, and for something like this to happen is very unfortunate. I know TJ is a soldier and he's going to keep fighting and get stronger and better and he'll be fine."

Jones is just the latest big man absent from the Houston lineup. Center Dwight Howard has missed the past 24 games with swelling in his right knee. His return is expected in the next two weeks, although Howard didn't practice with the team Friday.

With Jones out of the lineup, the Rockets will turn toward Joey Dorsey to start at power forward. Dorsey has picked up significant playing time because of injuries to Howard and Jones.

"I've been playing and sitting," said Dorsey, who has started 12 games this season. "I've been working out like crazy and working on my conditioning and free throws and things like that so I'll be ready to jump into the rotation."

Another big man, rookie forward Kostas Papanikolaou remains out with a right ankle sprain. The Rockets have played a majority of games without their full complement of big men, and, as they enter the backstretch of the season, there are no plans to sign someone to fill the holes.

On the season, the Rockets are tied for 13th with 43.9 rebounds per game and have allowed opponents to score 43.5 times in the paint this season, seventh in the league. Opponents are shooting 59.5 percent from the field within 5 feet of the basket against Houston, the eighth-worst mark in the NBA.

"Guys have to step up, I sure wish Kostas was ready to play, but he's not ready to play, either," McHale said. "You just have to deal with it and be ready to go."