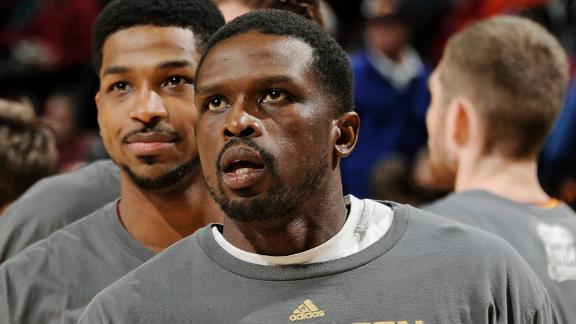 Deng was born in what is now South Sudan in Africa.

Deng, speaking at the Heat's media day, said he recently talked to Ferry and hopes they can make something positive of the situation.

"I think one of the hardest things to do as a human being, and it's something we should do more often, is forgive," Deng said. "I really do forgive Danny. It's not something I want to hold onto for the rest of my career or the rest of my life."

Deng said the Hawks were one of the few teams he considered this offseason. In July, Deng signed a two-year, $20 million deal with Miami before the comments became public earlier this month.

"I really believe that he's really sorry for what he said," Deng said. "And whether it came from him or wherever it came from, the main focus really should be on how we move on going forward. What are we going to do about it?"

Deng suggested the possibility of Ferry joining him in initiatives to promote African heritage.

"We could really turn this into a positive thing where people can benefit from," Deng said. "It's something we'd like to start, working together with Danny and helping people back home in Africa or working with an organization. Just so that one day we could look back and say this happened and it was something negative, but look at how it turned around and how it became something positive.

"I'm not the type of person to hold on and be angry at somebody or be angry at Danny. I don't think Danny is racist. I really don't. I really don't know Danny to describe him as a person. I just know who he is. That's just what I believe in. I would like to put it behind me and just move forward. But I would really love if I could do something positive out of it."

On Sept. 7, Hawks owner Bruce Levenson announced he was selling his controlling stake in the team after an inflammatory email to Ferry and the team's ownership group surfaced as a result of an internal investigation about its racial conduct. The investigation stemmed from Ferry's comments made over a conference call with the team's ownership group in June where he said Deng "has a little African in him. He's like a guy who would have a nice store out front and sell you counterfeit stuff out the back."

Ferry then spoke with Deng and issued a public apology. Ferry has since vowed to go into counseling.

"Obviously you have to be upset [about Ferry's comments]," Deng said. "I don't know how often I'll be angry about words. Because words are just words. But words to describe myself or describe where I came from, everything that I've done, I just wish it was about basketball. There's no need for it."

Ferry has claimed he was reading off a scouting report and that the comments did not reflect his personal beliefs.

Deng believes there is some good in Ferry's comments coming to light.

"I think Danny, if he could take the time back and read it before he says it, I think we would have never known that stuff was going on," Deng said. "Now we have a chance to put an end to it and just make sure those things don't happen again and we can educate people and how to talk about certain things."

Deng was asked whether he was close to signing with Atlanta this summer.

"I was," Deng said. "If I was there, maybe [Ferry's words] would not have come out. You just don't know. I didn't know definitely [if I was going to Atlanta]. But I'm here now."

Hall of Famer Magic Johnson tweeted on Wednesday that he had a "heart to heart meeting" with Ferry and believes he deserves a second chance with the Hawks or another team.

In a public statement after Ferry's comments were publicized, Deng said he was "saddened and disappointed that this way of thinking still exists today. I am ever more disturbed that it was shared so freely in a business setting."