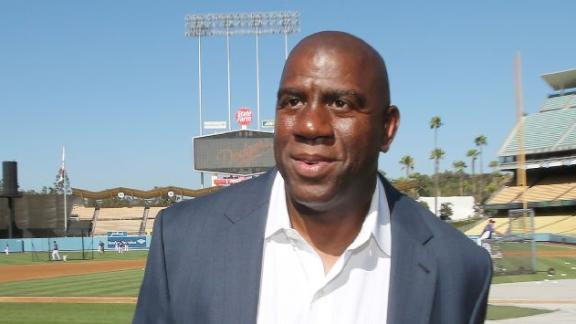 In a series of tweets, NBA Hall of Famer Magic Johnson said he met with embattled Atlanta Hawks general manager Danny Ferry and said he respected and appreciated Ferry's apology.

Just had a heart to heart meeting w/ Hawks GM Danny Ferry! He apologized for his comments about Luol Deng & the African American community.

- Earvin Magic Johnson (@MagicJohnson) September 23, 2014I have a lot of respect for Danny because he called and wanted to talk about how his comments offended so many people.

- Earvin Magic Johnson (@MagicJohnson) September 23, 2014After our long meeting, I think he deserves a second chance whether it is with the Hawks or another team.

- Earvin Magic Johnson (@MagicJohnson) September 23, 2014Ferry currently is on an indefinite leave of absence from the Hawks after inflammatory remarks about then-free agent Luol Deng were made public in August. Ferry, in a conference call with the team's ownership group, said that Deng, a native of what is now South Sudan, "has a little African in him."

He expounded on that by saying, "He's like a guy who would have a nice store out front and sell you counterfeit stuff out of the back."

Ferry has issued a public apology and vowed to undergo sensitivity training and meet with local leaders. Johnson originally was among those who called for the dismissal of Ferry as the team's general manager.

Deng, now a member of the Miami Heat, has since said he's proud to be African but "saddened and disappointed that this way of thinking still exists today. I am even more disturbed that it was shared so freely in a business setting."

NBA commissioner Adam Silver said Monday that the NBA has suspended any further work looking into the Hawks as it relates to the Deng matter.

"We were in the midst of an investigation when Bruce Levenson announced that he decided to sell his team," Silver said. "So we've put everything on hold. We'll see whether it's necessary to do any further investigation."

In addition to being without an in-office general manager, the Hawks are looking for a majority owner after Levenson volunteered to sell his controlling stake in the franchise following racial remarks he made in emails.

With the ongoing upheaval in the team's front office, Johnson also tweeted that former Hawks star Dominique Wilkins should be considered for an executive role.

Advice to Hawks CEO Steve Koonin: You should hire Dominique Wilkins as a high level executive.

- Earvin Magic Johnson (@MagicJohnson) September 23, 2014Advice to Hawks CEO Steve Koonin: No one knows more about basketball and loved by the Atlanta community than Dominique Wilkins.

- Earvin Magic Johnson (@MagicJohnson) September 23, 2014NBA players union executive director Michele Roberts, speaking along with Silver on Monday to announce a charity initiative, said she was "the last person to tell them how to do it except to say, clean up your house."

"I think they've got to figure out a way," Roberts said of the Hawks. "Like any entity that has a bad apple -- the apple is presumably gone. I don't know what's going to happen with Ferry, but at least the owner that made the offensive comments is gone.

"They've got to recreate credibility with the players and the Atlanta community."

Information from ESPNNewYork.com's Ian Begley and The Associated Press was used in this report.