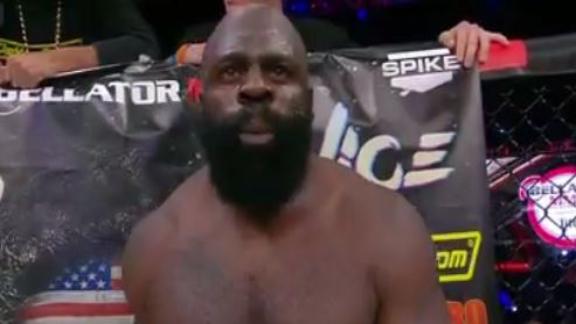 Dhafir Harris, aka Dada 5000, remains hospitalized but is in stable condition Saturday, according to a statement provided by the cage fighter's family.

Harris' manager, Mike Vazquez, told ESPN.com that the fighter had been in critical condition overnight and is expected to remain in the hospital for a "day or two." Harris also suffered a small fracture to his orbital bone, Vazquez said.

Harris, 38, suffered a TKO loss to Kimbo Slice at Bellator 149 on Friday. The heavyweight fight, which took place at Toyota Center in Houston, ended when an exhausted Harris (2-1) stumbled awkwardly to the floor at 1:32 of the third round.

The Miami native, who hadn't fought in an MMA contest since 2011, was removed from the cage via stretcher. Bellator officials told ESPN.com that shortly after the fight Harris was able to sit up and was taken to a hospital for precautionary reasons.

According to statement put out by the Harris family, distributed by Bellator, Harris suffered from "extremely high levels of potassium in his blood, which led to severe dehydration, fatigue and renal failure."

The statement goes on to say that Harris' high potassium levels were likely a result of losing 40 pounds for the bout. The maximum weight at heavyweight is 265 pounds, which Harris measured during an official weigh-in Thursday.

"Dada showed the heart of a lion in the cage -- not backing down throughout," the statement read. "He worked extremely hard preparing for the fight and stepped forward for three rounds against a tough veteran. He kept digging through the adversity -- leaving it all in the cage for his fans and supporters. You can never take that away from him.

"We ask for the public and media to respect Dada's privacy as he recovers."

Harris was the focus of "Dawg Fight," a documentary released last year that revolves around Miami's culture of backyard brawls.