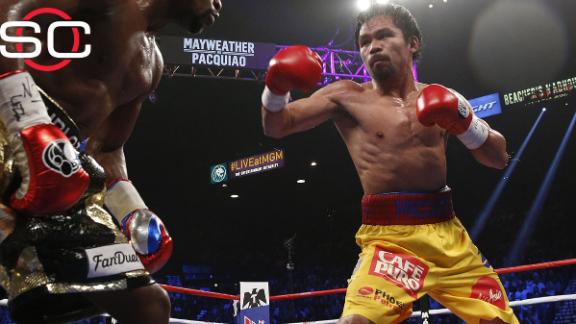 Dr. Neal ElAttrache, a famed orthopedic surgeon who performed the 90-minute procedure to repair Pacquiao's torn rotator cuff, said he could not be "more pleased with the results." It was an outpatient surgery, so Pacquiao will not stay overnight.

ElAttrache, who has also operated on athletes such asLos Angeles Lakers guard Kobe BryantandNew England Patriots quarterback Tom Brady, said he expects Pacquiao to return to the ring. He estimates that Pacquiao would not be able to fight again for nine months to ayear.

Pacquiao lost a unanimous decision to Floyd Mayweather in their long-anticipated pound-for-pound showdown on Saturday night at the MGM Grand in Las Vegas, but he went into the fight with a damaged right shoulder.

It was an injury that Pacquiao did not properly disclose to the Nevada State Athletic Commission, which could fine and suspend him for lying on his prefight medical questionnaire. Had Pacquiao disclosed the injury when it happened, about 2 weeks before the fight, the commission doctor would have worked with Pacquiao's team on a treatment plan and likely would have allowed him to receive an anti-inflammatory shot on fight night. But because the commission said it did not know about Pacquiao's injury until a couple of hours before the bout, it denied his request for the shot.

ElAttrache diagnosed Pacquiao (57-6-2, 38 KOs) with a "significant tear" in his rotator cuff on Monday.

"If all goes as expected with the surgery and the rehab is successful, Manny could be back training in about six months. At that point he will be regaining strength and endurance and competition is reasonable within nine months to a year," ElAttrache told ESPN.com on Monday. "But this is a severe enough tear that it won't heal without being repaired."

The Mayweather-Pacquiao fight will go down as the richest in boxing history and one of the most anticipated. Mayweather (48-0, 26 KOs) said on Tuesday he was open to a rematch next spring, when Pacquiao is supposed to be able to fight again. Later Tuesday, Top Rank's Bob Arum, Pacquiao's promoter, said Pacquiao would be interested in a rematch even though many were left with a bad taste in their mouth from the dull nature of the fight Saturday night. There have even been lawsuits filed against Pacquiao for fraud because he did not disclose the injury as required by the Nevada commission.