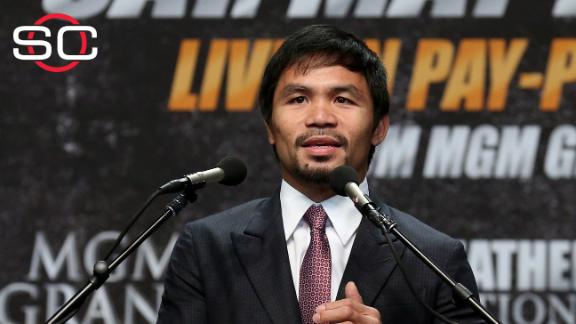 "We have an MRI scan that confirms he has a rotator cuff tear. He has a significant tear," said ElAttrache, who was still with Pacquiao at his Kerlan Jobe Orthopedic Clinic office in Los Angeles when he spoke to ESPN.com.

ElAttrache said Pacquiao will be out of action between nine months and a year, assuming the surgery and rehabilitation go well.

The day for the surgery has not been set, but it will take place in Los Angeles, Pacquiao adviser Michael Koncz said.

"After speaking with the doctor, it was determined that the best method and approach is for Manny to have surgery," Koncz said. "Manny is doing OK."

On Saturday night at the MGM Grand in Las Vegas, Pacquiao (57-6-2, 38 KOs) lost a unanimous decision to Floyd Mayweather (48-0, 26 KOs) in their long-awaited welterweight championship showdown -- the richest fight in boxing history and one of the most anticipated bouts of all time.

"Manny did the best he could under the circumstances," Koncz said. "We have to give Floyd credit, too. Floyd was the better man [Saturday] night. Floyd did a tremendous job, and he won the fight."

Pacquiao, known for his aggressive style and all-out attack, was clearly not the same offensive-minded fighter he has typically been, and after the fight, Top Rank promoter Bob Arum said Pacquiao suffered a shoulder injury in training camp about 2 weeks earlier and that it hampered him in the fight. ElAttrache said surgery was the only choice for Pacquiao.

"Once you know he has a tear that's not going to heal on its own, then the decision for an active person is you want to try to fix this before it gets bigger," ElAttrache said. "If all goes as expected with the surgery and the rehab is successful, Manny could be back training in about six months. At that point, he will be regaining strength and endurance, and competition is reasonable within nine months to a year. But this is a severe enough tear that it won't heal without being repaired."

ElAttrache said that Pacquiao was able to get through the 12 rounds against Mayweather because he "modulated his approach. He moderated what he did with his right hand. His punch count was less than it has been. He did alter the way he fought to get through the fight with the injury. He is in pain."

On Saturday night, Nevada State Athletic Commission officials refused Pacquiao's request to take an anti-inflammatory shot in his shoulder in his dressing room. Francisco Aguilar, the chairman of the NSAC, said it was Pacquiao's fault for not disclosing his injury sooner.

"It's part of the game," Pacquiao said at the postfight news conference. "I don't want to make alibis or complain or anything [but] it's hard to fight one-handed."

Pacquiao, trainer Freddie Roach and Arum did not provide much in the way of details as to how the injury occurred but said they considered postponing the fight. But when Pacquiao responded to treatment, the decision was made to go through with the long-anticipated bout matching boxing's two pound-for-pound best in a fight more than five years in the making.

"I thought he fought a courageous fight under all the circumstances, and I'm very proud of what he accomplished tonight," Arum said of Pacquiao at the postfight news conference.

Arum claimed that the Nevada commission had been made aware of the injury shortly after it happened and that Top Rank had filed paperwork requesting that Pacquiao be allowed to receive an anti-inflammatory shot because he had similar treatment during training. The shots also had been approved by the U.S. Anti-Doping Agency, which conducted random testing on Mayweather and Pacquiao for the bout.

However, Aguilar said the commission was not told of Pacquiao's injury until 6:30 p.m. PT on fight night.

"The medications he was taking were disclosed on his medical questionnaire, but not the actual injury," Aguilar said after the fight. "This isn't our first fight. This is our business. There is a process, and when you try to screw with the process, it's not going to work for you."

There is a box on the medical questionnaire that specifically asks if a fighter has a shoulder injury, and Pacquiao did not check the box, Aguilar said. Aguilar said Pacquiao could be fined or suspended by the commission for not answering the question on the form before the weigh-in on Friday.

Arum was questioned about why the fight was not postponed, especially given that the $100 price tag for the pay-per-view was the highest ever and tickets were also the most expensive in boxing history, with many people paying in excess of $10,000 per ticket.

"Athletes always fight hurt," Arum said at the news conference. "We felt that the work that was done on the shoulder during training would give him the opportunity to use the right hand. We were disappointed when in the third round the injury kicked up again, but this is always the case with sports. You get guys injured in training. He then deals with the injury, he thinks he's conquered it and then he gets re-injured in the game. It happens in football. It happens in any sport."

At his postfight news conference, Mayweather said he fought with two injured shoulders and bad hands and wasn't interested in Pacquiao's excuses.

"If [Pacquiao] would have come out victorious, the only thing I could have got up here and said was, 'I have to show respect and say he was the better man,'" Mayweather said. "Both my arms were injured. Both my hands were injured, but as I've said before, I always find a way to win."

On Monday, Top Rank and Pacquiao put out a joint statement to clarify their position.

They said that after the injury Pacquiao saw a doctor and it was decided that "with short rest, treatments, and close monitoring, Manny could train and, on May 2, step into the ring against Floyd Mayweather.

"Manny's advisors notified the United States Anti-Doping Agency of the shoulder injury and the treatments being proposed by the doctors during training and on fight night. USADA spoke to Manny's doctors twice, investigated, and confirmed in writing that the proposed treatments, if used, were completely allowed. The medication approved for fight night was a non-steroidal anti-inflammatory [Toradol]. Manny continued to train and his shoulder improved, though not 100 percent. This is boxing, injuries happen, and Manny is a warrior. Again, in consultation with his doctors, promoter and advisors, Manny decided to proceed with the fight anticipating that he could receive his pre-fight treatment. That specific treatment had been approved by USADA in writing at least 5 days before the fight." Pacquiao and Arum also said they believed that because the medications he was taking were disclosed that he would be able to continue with the treatment on fight night.

"On his pre-fight medical form filled out earlier in the week, Manny's advisors listed the medications that Manny used in training and the medications that might be used on fight night," they said in the statement. "A few hours before he was expected to step in the ring, when Manny's doctors began the process, the Nevada commission stopped the treatment because it said it was unaware of Manny's shoulder injury. This was disappointing to Team Pacquiao since they had disclosed the injury and treatment to USADA, USADA approved the treatments, and Manny had listed the medication on his pre-fight medical form.

"Also, USADA had provided a copy of its contract with the fighters to the commission. An hour before the fight, Manny's advisors asked the commission to reconsider and the director of USADA advised the commission that USADA had approved the fight-night treatment, but the commission denied the request. "With the advice of his doctors, Manny still decided to proceed with the fight. His shoulder wasn't perfect but it had improved in training camp. However, as Manny has said multiple times, he makes no excuses. Manny gave it his best."

Pacquiao and Top Rank did not address why he did not check off the box on his prefight medical form to disclose the injury. Aguilar said had he done that, the commission doctor would have monitored Pacquiao leading up to the fight and that he would have been allowed to receive the prefight anti-inflammatory shot.