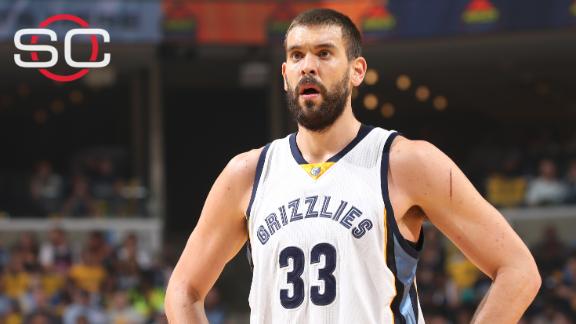 The Memphis Grizzlies and star center Marc Gasol have agreed to a five-year max contract worth an estimated $110 million, sources told ESPN.

The deal includes a player option that would allow Gasol to opt out and become a free agent after the fourth year of the contract, according to sources.

The exact monetary value of the deal, which was agreed to Monday, will be determined by the league's salary cap.

As ESPN reported last week, Gasol shunned the opportunity to let interested teams court him in free agency, signaling to the rest of the league that the 30-year-old essentially was unavailable to everyone except Memphis.

Teams such as the Los Angeles Lakers, New York Knicks and Milwaukee Bucks -- all of whom had designs on making a run at the Spaniard in free agency -- abandoned all plans to pitch Gasol before free agency began.

Players and teams can come to verbal agreements on deals, but no contracts can be formally signed until Thursday, when a leaguewide moratorium on roster business is lifted.

Gasol, 30, was selected with the 48th overall pick by the Lakers in the 2007 draft. In the 2008 deal that brought his brother Pau to the Lakers, Marc Gasol's rights were sent to the Grizzlies.

In seven seasons with Memphis, Gasol has developed into one of the league's premier big men, winning NBA Defensive Player of the Year in 2013. He was selected as first-team All-NBA last season, second-team All-NBA in 2014, and he has twice been named an All-Star (2012, '15).

Gasol has averaged double-figure scoring in all seven of his NBA seasons, with a career-high 17.6 points per game last season in 81 games, all starts. He was regarded as the anchor of one of the league's best defensive teams despite not being an elite rim protector (1.6 blocks per game last season).

Gasol was an integral piece to the Grizzlies' rise, leading them to 55 wins last season and a first-round playoff victory over the Portland Trail Blazers. The Grizzlies have appeared in five consecutive postseasons and made it to the Western Conference finals in 2013 before bowing out in four games to the San Antonio Spurs.

Before graduating from Lausanne Collegiate School in Memphis, the 7-foot-1 Spaniard played professionally as a teenager for Barcelona (2003 to '06) and Akasvayu Girona before declaring for the 2007 draft. He played for Akasvayu Girona from 2006 to 2008.