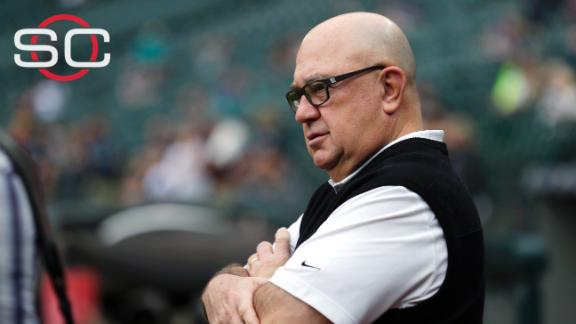 SEATTLE -- A year to the day after praising Jack Zduriencik as he was rewarded with a contract extension, Seattle Mariners President Kevin Mather found himself speaking with ownership this week on all the areas he believed the club was lacking.

It was clear to Mather that Zduriencik's time as Seattle's general manager was at an end, and his regret was not making a change sooner.

"I was so optimistic about 2015 at the major league level that I waited too long to start asking myself and others the tough questions about what is going on here," Mather said. "Why aren't we having more success here? What's going wrong here?"

Zduriencik was fired Friday after seven disappointing seasons in which the club failed to end its playoff drought under his watch. Zduriencik came to Seattle before the 2009 season, arriving from Milwaukee as one of the top talent evaluators in baseball and with the task of rebuilding a thin farm system while putting a winning product on the field at the major league level.

But Seattle missed too often both in player development through the draft and in free agency.

"I really enjoyed my seven years here. There is not anything I could say in a negative vibe about anything that went on in Seattle," Zduriencik told reporters in Chicago on Friday. "It was a great experience and we'll move on."

Zduriencik was given a contract extension last August, and this season was to be the culmination of his work, with the Mariners coming off an 87-win season in 2014, the addition of slugger Nelson Cruz and the expectation that the second-longest playoff drought in baseball would come to an end.

Instead, barring a stunning September run, the drought dating to 2001 will continue. The floundering club began Friday 10 games under .500 and 12 games behind Houston in the American League West. Assistant general manager Jeff Kingston is taking over on an interim basis.

Mather said he kept waiting for this year's team to overcome its early slumps and rally its way back into contention. He said the optimism caused him to "drag my feet" and wait too long on re-examining the state of the organization under Zduriencik.

That process hit a critical juncture on Wednesday -- one year after Zduriencik's extension was announced -- when Mather spoke with CEO Howard Lincoln about making a change. Mather flew to Chicago on Thursday and informed Zduriencik of the decision Friday morning.

"We made this decision today not on the 2015 major league club, but the 2016 to 2020 major league team and getting back to meaningful baseball in October," Mather said.

Mather said he would like to find a general manager with experience and not someone who needs time to learn on the job. His hope is to have a small pool of candidates by the end of the regular season and a decision made on who will take over by mid-October as to not fall behind on the upcoming offseason.

"I think we have the nucleus of a very good baseball team. The nucleus of this team should bode well for candidates," Mather said.

Zduriencik was hired in part because of his drafting and development track record in Milwaukee, but only one player drafted during his Seattle tenure has developed into an All-Star: third baseman Kyle Seager. Three times Seattle had top-five draft selections with Zdureincik in charge, but none of those players -- Danny Hultzen, Dustin Ackley and Mike Zunino -- developed into solid contributors in the majors.

Seattle did land Robinson Cano and Cruz in free agency the past two seasons, but Zduriencik's had too many misses in free agency and via trades. Seattle struggled to recover from the signing of Chone Figgins, and trades for Cliff Lee, Jesus Montero and Milton Bradley failed, creating even more discontent among fans.

There was also a lack of continuity between Zduriencik and his managers. Zduriencik hired Don Wakamatsu as his first manager in 2009, but he was fired during the 2010 season. Eric Wedge was hired before the 2011 season but chose not to return after the 2013 season in part because of issues with the front office.

Current manager Lloyd McClendon is under contract through 2016. Mather said he will encourage keeping McClendon but that it will be up to the next GM to decide who Seattle's field manager will be in 2016.

"I think Lloyd has done a very good job. I think his coaching staff has done a very good job, and I am certainly going to -- as I narrow in on candidates -- get their opinion of our manager and coaching staff and encourage them because to keep them because quite frankly I think they've done a tremendous job," Mather said. "But it's clearly the general manager's decision."