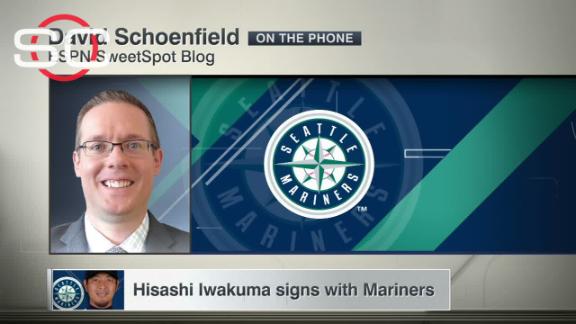 SEATTLE -- The Seattle Mariners have re-signed right-hander Hisashi Iwakuma after an agreement between Iwakuma and the Los Angeles Dodgers was never finalized.

Seattle announced the deal with Iwakuma late Thursday night, after general manager Jerry Dipoto delivered the news at the team's holiday party. The deal includes a one-year contract for 2016 and options for the 2017 and 2018 seasons. Financial terms were not announced.

"We said from the start that Kuma was a priority for us," Dipoto said in a statement. "Obviously, the developments from the last few days allowed us to get back in the game. It's a credit to our ownership -- to Howard Lincoln, to Kevin Mather, to our entire ownership group -- that we were able to get aggressive and find a way to bring Kuma back to the Mariners. We're all thrilled. This is a big move for us."

Iwakuma was a priority for Seattle in the offseason, but the Dodgers and Iwakuma struck a deal Dec. 6, a pact reportedly for three years and roughly $45 million.

However, the deal was never completed. A source told ESPN's Mark Saxon earlier Thursday that it was in jeopardy after the Dodgers reviewed Iwakuma's physical.

The Japan-based Jiji Press first reported Thursday that the Dodgers were backing away after the physical.

The medical issue revealed by the physical is not yet known.

Dipoto's announcement that Iwakuma would be rejoining the Mariners sparked raucous applause at their holiday party:

Iwakuma, who turns 35 in April, was 9-5 with a 3.54 ERA in 20 starts last season for the Mariners, including the first no-hitter of his career in August against Baltimore, and was 4-2 with a 2.17 ERA over his final seven starts. He was limited by a strained lat muscle last season.

Iwakuma has pitched his entire career in the majors with Seattle, going 47-25 with a 3.17 ERA in 111 games. He was an All-Star in 2013 and became the second Japanese-born pitcher to throw a no-hitter, joining Hideo Nomo. Since being moved into Seattle's rotation on July 2, 2012, Iwakuma has the fourth-best ERA in the American League at 3.09. When healthy, he has been a stabilizing part of Seattle's rotation, often slotting behind ace Felix Hernandez.

The Mariners also traded for left-handed starter Wade Miley from Boston after it appeared they had lost Iwakuma to Los Angeles.

Iwakuma's return all but sets Seattle's rotation going into spring training. Iwakuma and Hernandez will be the anchors, and they will be joined by Miley;Nathan Karns, who was acquired in a November trade;and young standout Taijuan Walker.

"We feel like this really puts a finishing touch on what we think has been a very productive offseason," Dipoto said.

The Dodgers would have had to forfeit their No. 25 overall pick in June's draft had they signed Iwakuma because he rejected the Mariners' $15.8 million qualifying offer in November.

Los Angeles continues to look for help in its rotation, which now includes Clayton Kershaw, Brett Anderson, Alex Wood and, it hopes, Hyun-Jin Ryu, who is coming off May shoulder surgery.

The Dodgers swapped three prospects for three other prospects in a three-team deal with the Cincinnati Reds that sent All-Star third baseman Todd Frazier to the Chicago White Sox on Wednesday.

That deal could be the precursor to a larger trade. The Dodgers reportedly have been linked to the Miami Marlins' Jose Fernandez, among other young pitchers.

ESPN's Mark Saxon and The Associated Press contributed to this report.