Mark Few on late non-call: 'Had no idea ... nobody made me aware' 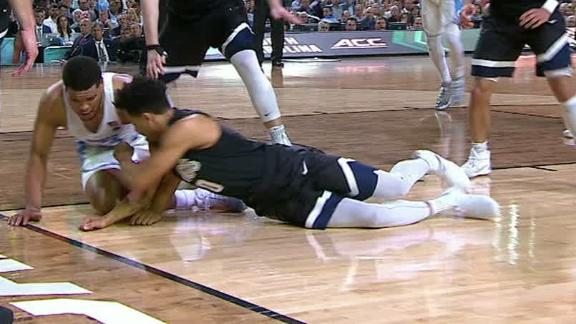 GLENDLALE, Ariz. -- Mark Few said he was unaware during the game that Kennedy Meeks had his hand out of bounds during a critical scramble for a loose ball in the final minute of North Carolina's 71-65 victory over Gonzaga in the national title game on Monday night.

With 49.1 seconds to play and North Carolina leading 66-65, Meeks battled Gonzaga's Silas Melson for a loose ball. Video of the scramble showed Meeks with his right hand out of bounds as he tried to snatch the ball from Melson.

A jump ball was called, and the Tar Heels retained possession before scoring the last five points of the contest.

Per NCAA rules, it was not a reviewable play.

"No, there wasn't [any talk of reviewing the play]," Few said after the game. "I wish ... and that's probably on me. I had no idea. I just, from my angle, it didn't look like it was a situation where there was an out-of-bounds situation, or else I would have called for a review. So nobody made me aware of it, or I certainly would have within the last minute there or two minutes. So that's tough. It's tough to hear. But, you know, that's just the way it goes."

The Tar Heels turned the extra possession into an inside hoop from Isaiah Hicks that made it 68-65 with 26 seconds left. The Bulldogs turned it over on their next possession, Justin Jackson dunked with 12 seconds left to make it 70-65, and that was pretty much it.

The referees were not available for comment when The Associated Press learned about the issue through screenshots of the play on social media. Through NCAA spokesman David Worlock, national coordinator of basketball officials J.D. Collins said the play was not reviewable.

In a game with 44 fouls, there was plenty of reason to complain about officiating, though both teams steered away from really laying into the referees.

"It's a very difficult game to call. I'm sitting over there, I'm not thinking the officials are doing a terrible job," North Carolina coach Roy Williams said. "I'm thinking our offense stinks."

"I told them don't worry about what the referee is doing, he missed a call [earlier], but my God, we missed four free throws in a row, missed layups. So we were at fault just as much as anybody else," Williams said.