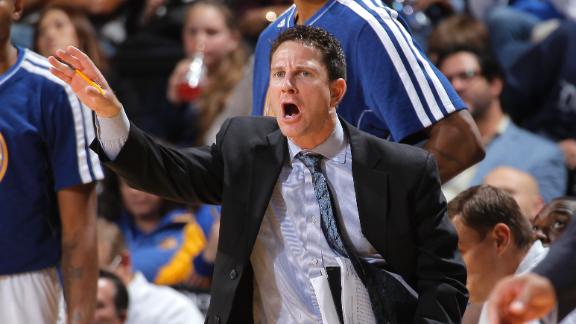 OAKLAND, Calif. -- Golden State Warriors coach Mark Jackson handled questions about the chatter swirling around his future with his usual bold and boisterous banter Sunday night, raising his eyebrows and smiling after each answer.

Jackson knows his critics -- and the decision-makers in the organization -- will not be satisfied just because he can spin a sentence that projects confidence. And he understands a secure future with the Warriors will depend on how his players perform in the playoffs.

"My job will be determined on winning," Jackson said. "I'm fine with that."

Even in the midst of the franchise's best season in 20 years, Jackson's job security and his relationship with ownership have been at the forefront of discussion.

Much of that has been fueled by the curious moves involving two of his assistant coaches the past two weeks. Team management fired Darren Erman on Saturday for "a violation of company policy" but declined to reveal the policy he violated. And Jackson reassigned Brian Scalabrine to the team's D-League affiliate in Santa Cruz on March 25 because of what Jackson called a "difference in philosophies."

Support remains high for Jackson in the locker room. Seemingly everyone from All-Star point guard Stephen Curry to veteran center Jermaine O'Neal has gone out of the way to applaud the job Jackson has done. General manager Bob Myers said the team believes in Jackson's abilities.

But co-owner Joe Lacob has yet to publicly support Jackson's future with the team beyond this season. The team's decision to pick up Jackson's contract option for the 2014-15 season last summer instead of negotiating a long-term deal has led to speculation that the Warriors need to at least match last season's second-round playoff appearance or Jackson's job could be in jeopardy.

Jackson says he has a great relationship with the front office and Lacob. He added that the two spoke for about 15 minutes in San Antonio during Golden State's recent road trip.

"There's no friction at all," Jackson said. "I humbly submit to you, if you've got a problem with me as a person, then it's your problem. I'm low maintenance. What you see is what you get, and I'm going to be a fun-loving, enjoyable guy that's easy to talk to. I have no issues with anybody in this organization, and it's been that way from day one."

Jackson has repeatedly praised his players and the job Myers and his staff have done to rebuild a team that went 23-43 just two years ago during the labor-lockout shortened season. He also has tried to put the focus back on the floor, where the Bay Area's beloved basketball team is beginning to blossom again this spring.

The Warriors (48-29) eclipsed last season's win total in Sunday night's rout of Utah, moving 19 games over .500 for the first time in 20 years. Golden State is 1½ games behind fifth-place Portland and 1½ games ahead of seventh-place Dallas in the crammed Western Conference standings.

Barring an epic collapse in the final five games, the Warriors will make the playoffs in consecutive years for the first time since the 1990-91 and 1991-92 seasons. They have done that while coping with injuries that have sidelined starters Andrew Bogut, David Lee and Andre Iguodala for prolonged stretches.

"The numbers speak for themselves," Jackson said.

Winning in the regular season, though, doesn't always mean much. All Jackson has to do is look back at what happened after beating Denver in the first round last season, when the Nuggets fired George Karl after he led them to a franchise-record 57 wins and earned NBA Coach of the Year honors.

Jackson noted that the depth in the West this season means that plenty of good teams with good coaches won't make it past the first round. Like most years, that could mean some don't return next season -- though he's not planning to be among either group.

"Believe it or not," Jackson said, "I am absolutely convinced that my future is just fine."

Malone: 'Disappointing Effort'
Following a 102-69 loss to the Warriors on Friday, Kings coach Mike Malone said he was disappointed with the loss.