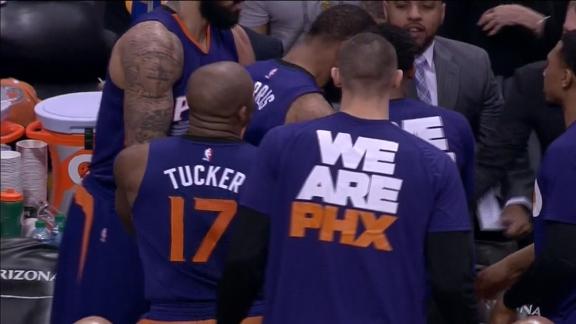 A disappointing season for the Phoenix Suns turned uglier Wednesday when teammates Markieff Morris and Archie Goodwin got into a physical altercation on the bench.

Morris and Goodwin were seen arguing during a timeout in their game against the Golden State Warriors. The argument escalated into a shoving match between Morris, who is 6-foot-10, 245 pounds, and Goodwin, who is 6-5, 200 pounds. Teammates quickly stepped in and separated the two.

"That was nothing. That was part of being a leader and big brother," Morris said after the team's 112-104 loss. "Of course it looks bad. Everything I do looks bad."

Both players returned to the game. Morris finished with 19 points, eight rebounds and four assists in 36 minutes, and Goodwin added 20 points, two rebounds and two assists in 28 minutes. The Suns have lost nine straight and 24 of their last 26.

Wednesday's episode was another low point for a Phoenix team many figured would compete for a spot in the playoffs. Instead, the Suns have been beset by injuries and drama, and Wednesday's loss dropped them to 14-40, the second-worst record in the Western Conference.

Before the season even began, Morris expressed his displeasure with the franchise after his twin brother,Marcus Morris, was traded to Detroit.

A bad start and rough patch that saw the team lose 19 of 21 games cost coach Jeff Hornacek his job. Among the troubling moments for Hornacek was a Dec. 24 incident in which Markieff Morris threw a towel toward him on the sideline during a game. The Suns suspended Morris for two games.

Hornacek was fired on Jan. 31 and replaced on an interim basis by assistant Earl Watson.

Compounding those issues have been a rash of injuries that have hampered the team's desire to deploy its multiple-guard attack.

Guard Eric Bledsoe (knee) and small forward T.J. Warren (foot) were lost to season-ending injuries, and guard Brandon Knight has been out since mid-January with a groin injury.