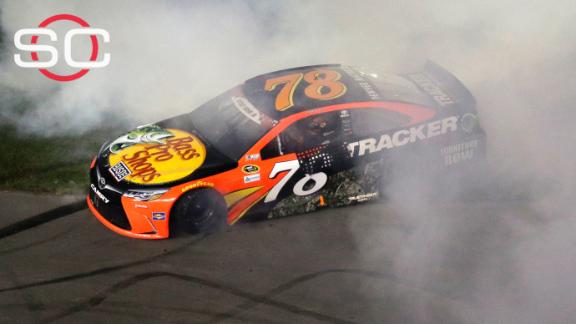 Truex showed that in a big way Sunday night, leading a NASCAR-record 588 of 600 miles to win the Coca-Cola 600 and break free of the bad luck that seemed to hit him when he dominated races.

"The whole weekend was one of those fairy-tale weekends," said Truex, who started from the pole. "But even leading at the end, I thought, 'All right, when's the caution going to hit.' And it didn't."

Especially when things have gone as wrong as they had for Truex and his single-car Furniture Row team the past year.

He led 141 laps at Texas, yet got strung up by poor pit strategy and finished sixth. In Kansas this month, he was out front for 172 laps until a loose wheel knocked him back to 14th.

A year ago here, Truex led the most laps at 131, but he fell to fifth when he pitted for fuel late and four cars, including winner Carl Edwards, stayed out.

Truex never let it get to him.

"I had confidence. I had faith," Truex said.

Truex won for the fourth time in the series and the first time since last June at Pocono.

Truex took the surprise out of this one early and was barely touched by the field. He was passed by Johnson on a restart 55 laps from the end, but Truex went back in front a lap later and was not pushed again.

He bettered Jim Paschal's mark of leading 335 laps to win at Charlotte in 1967.

Four-time Coca-Cola 600 winner Johnson was on Truex's door a handful of times on restarts, but then would fade back. Harvick, who won here in 2011 and 2013, was the best of the rest as he got by Johnson 44 laps from the end -- yet never made a serious run at the top.

"I mean, they have had a few runs where they have just been the class of the field and things have kept them from Victory Lane," Johnson said. "Tonight he wasn't going to be denied, there was no way around that."

Owner Roger Penske, who had a disappointing day at Indianapolis, hoped to rebound with his NASCAR duo of Keselowski and Joey Logano, who won the All-Star Race at the track last weekend.

But Logano was set back by a pit road penalty and Keselowski could never make a serious challenge.

WHO'S HOT: Truex finally cashed in with a victory when he had the most dominant car. Truex locked up a spot in the Chase for a Championship and marked himself as a car to beat heading into the summer.

WHO'S NOT: Kyle Busch has suddenly gone cold; this was his second straight finish in the 30s after spending much of the season in the top five. Busch wound up 33rd at Charlotte after finishing 30th at Dover. He had nine top-five finishes, including three victories, in the first 11 races.

WHAT WRECKS? NASCAR's longest race of the season was also among its cleanest, with just four cautions -- and one of those was to check tire wear over the first 25 laps. The four caution periods took up just 19 laps, leading to Charlotte records for fastest average speed (160.644 mph) and fastest race (three hours, 44 minutes, eight seconds). Both marks eclipsed records from 2012 (average speed of 155.687 mph; time of three hours, 51 minutes, 15 seconds).

THEY SAID IT: "I kind of felt like he was playing with us. He was so fast." -- Johnson on Truex's showing

DID YOU SEE THAT? The biggest wow moments probably came prerace when the United States military put on a Memorial Day weekend display for the large crowd. There were tanks, soldiers marching down the steps of the stands, a flyover and a paratrooper display.

UP NEXT: Pocono Raceway, June 5. Truex is the defending winner.