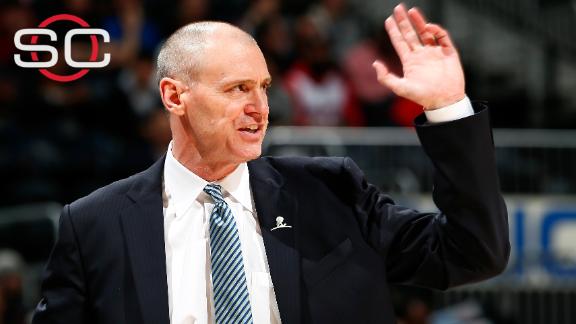 Coach Rick Carlisle and the Dallas Mavericks have come to terms on a new contract extension.

Sources told ESPN.com the extension is a new five-year deal in the $35 million range that will make Carlisle the league's highest-paid coach among those without a dual executive role and will take him well into his second decade with the club.

Carlisle was widely believed to be in the final year of his second contract with the Mavs, but sources say the club actually held a little-known team option for the 2016-17 season. The new five-year deal will take effect in 2017-18 and span through 2021-22.

"Mark Cuban, Donnie Nelson and Dirk Nowitzki are the reason an extension like this is possible. I have best owner and general manager in sports, and one of the greatest players in NBA history to thank for this opportunity. There is much work to be done as we move forward," the statement said.

Cuban was likewise complimentary in addressing the extension.

"I'm excited to have him back for the long term," Cuban said. "He's earned it. He's worth it. We're a better organization on and off the court because of him. Rick is a top-three coach in the league. Just having that kind of ability, you can't really quantify it."

ESPN.com first reported on Oct. 26 that Carlisle, 56, and the Mavericks were in advanced negotiations on an extension. With Dallas' second victory of the season, Carlisle surpassed Don Nelson as the winningest coach in franchise history.

"He's been the man here ever since he got here," Dirk Nowitzki said. "He just knows how and when to push the right buttons. In a long season, that's sometimes tough."

One of just five active NBA coaches with a championship on his rsum, Carlisle left his role as an ESPN analyst to join the Mavericks in May 2008. After successful coaching stints in bothDetroit and Indiana, he now ranks as one of just 11 figures in league history to win it all as both a coach and player, thanks to Dallas' title in 2011.

The Mavs' desire to keep him in place with another long-term deal has been anticipated for some time, with president of basketball operations Donnie Nelson announcing in April that he and Cuban regard Carlisle as "our Jerry Sloan," referring to the respectedUtah Jazzcoach who spent 23 years with the team.

"He can be in Dallas as long as he wants to be," Nelson said after Dallas' elimination in the first round of the playoffs by the Houston Rockets.

ESPN.com's Tim MacMahon and The Associated Press contributed to this report.