Mayweather to make at least $32M 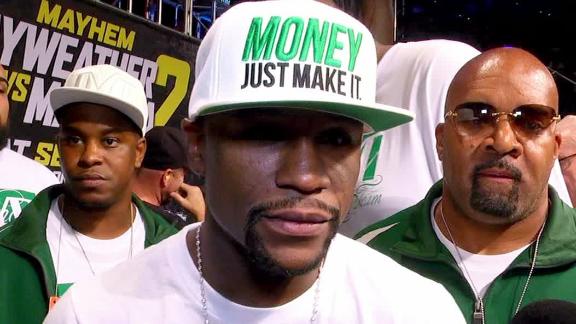 LAS VEGAS -- Pound-for-pound king Floyd Mayweather Jr., already the highest-paid athlete in the world according to ESPN The Magazine and Forbes, will pocket a guaranteed minimum of $32 million for his rematch against Marcos Maidana, according to the contract filed with the Nevada State Athletic Commission before Friday's weigh-in.

Mayweather (46-0, 26 KOs), who wore a hat to the weigh-in that read "Money: Just Make It," and Maidana (35-4, 31 KOs) meet in a rematch with Mayweather's welterweight and junior middleweight world championships on the line on Saturday night (Showtime PPV, 8 p.m. ET) at the MGM Grand Garden Arena. They both weighed inside the 147-pound welterweight limit, Mayweather at 146 and Maidana 146.

Mayweather, nicknamed "Money," controls most of the revenue for the fight -- from the pay-per-view sales, the gate, foreign television sales, sponsorships, merchandise and closed circuit sales -- so when a full accounting is done he likely will earn far more than $32 million.

Mayweather also earned a minimum $32 million for his majority decision victory against Maidana in their first fight in May.

The fight with Maidana will be the fourth on the six-fight contract Mayweather signed with Showtime/CBS in 2013. Including Saturday night's fight, he will have been paid a minimum of $137.5 million on the deal. His minimum was $32 million apiece for the two fights with Maidana and Robert Guerrero, and a record $41.5 million for the showdown with Canelo Alvarez last September, which shattered numerous boxing revenue records, including the record for domestic pay-per-view ($150 million) and live gate (just over $20 million).

Mayweather Ready For Maidana
Floyd Mayweather looks ahead to his fight with Marcos Maidana on Saturday night.