McCown expects to start for Browns 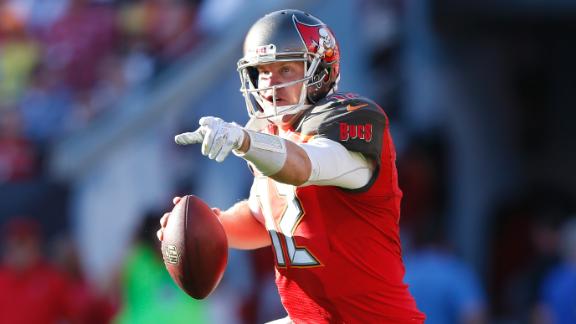 The Cleveland Browns last week signed Josh McCown to a three-year deal worth $14 million, including $6.25 million guaranteed and $6 million in incentives, which is better than typical backup money.

McCown is taking a starter's mentality to Cleveland too.

"That's my expectation right now," McCown told ESPN Radio's "Mike & Mike" on Monday about his goal to start for the Browns. "We'll see, as things unfold, what their plan is, but that's my expectation. I'm going to compete as such to do that."

McCown signed a bigger deal after going 1-10 as the Tampa Bay Buccaneers' starter last year than he did the previous offseason, when he signed a two-year, $10 million deal coming off a 13-touchdown, one-interception performance with the Chicago Bears.

Released by the Bucs on Feb. 11, McCown used the following 16 days to create a market. The Bills, Jets and Bears were all reportedly involved. In what's considered a weak free-agency market for quarterbacks, McCown capitalized.

The Browns have started 22 quarterbacks since 1999. McCown seems to understand the inherent skepticism of the potential No. 23 on that list, especially since he is coming off an 11-touchdown, 14-interception season. McCown supporters can point to a thumb injury, shaky offensive line play and the September leave of absence of offensive coordinator Jeff Tedford as reasons for his struggles.

Speaking with local media Monday afternoon, McCown said he understands the "tall order" of succeeding in Cleveland but isn't discouraged by past results.

"If you just look at it like that and say 22 guys have been there before, you could say let's pack up and go home," said McCown, who added that he owns the part he played in Tampa Bay's struggles last year. "That's not my mindset. ... I want to do everything I can to change that."

McCown is expected to share the quarterback room with Connor Shaw and Johnny Manziel once the former No. 22 overall pick returns from a treatment facility.

McCown offers the Browns flexibility. He can be a competent starter or backup/mentor to Manziel.

Quarterbacks should "push each other" in meeting rooms, McCown said, and Cleveland will be no different in 2015.

"That's my goal with Johnny, to help him grow and play well as a player," McCown told ESPN Radio.

McCown hopes to "help [the Browns quarterbacks] come together to play good football."

Asked if he signed with Cleveland because the Browns gave him the best chance to start, McCown said the right fit was most important.

"If I go there, can we win football games and be productive," McCown said. "NFL coaching experience [of offensive coordinator John DeFilippo and quarterbacks coach Kevin O'Connell] was big for me."