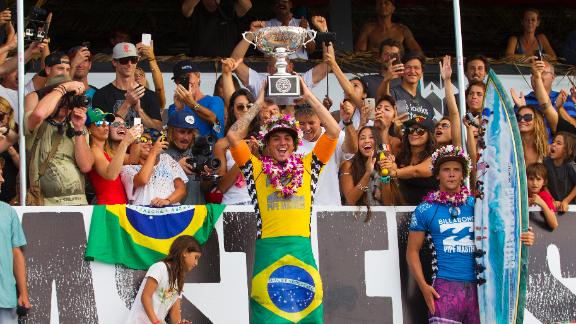 ESPN
By Jamie Tierney
Gabriel Medina became the first ever Association of Surfing Professionals (ASP) world champion to hail from the nation of Brazil at the Billabong Pipeline Masters in Memory of Andy Irons on Friday in Hawaii. Medina, 20, took second place at the event and won the world title over three-time champion Mick Fanning and 11-time winner Kelly Slater.

Medina clinched the crown after Fanning lost his Round 5 heat against Medina's Brazilian compatriot Alejo Muniz. Medina was in the water at the time, getting ready for his quarterfinal heat. Tears of joy streamed down his face and he hugged fellow competitor Filipe Toledo, who grew up just a few beaches away from Medina near Sao Paulo in Brazil.

"This is special day not just for me, but for my family and the fans," said Medina.

Medina joined the raucous celebration on the beach, led by his stepfather, Charles Serrano, and hundreds of Brazilian surf fans, despite the fact that his heat was still taking place. Medina paddled back out and still managed to win despite surfing only half the heat.

Medina, who hails from Maresias, Brazil, seemed at home during the final day of the Pipe Masters, and the medium-sized hollow waves on offer at Pipeline were strikingly similar to a good day at his home break. He reveled in the conditions, getting tubed with ease both frontside and backside, and punctuating his rides with spinning aerials.

He went on to take second place at Pipeline, losing a close and exciting final to Australia's Julian Wilson. Wilson, 26, surfed an incredible six heats on the day, including three in a row at the end. Although clearly exhausted by the end, he saved his best for last, scoring a 9.93 on his first wave of the final and a 9.70 on his last. Medina notched a perfect 10 near the beginning and led throughout. His last wave was also spectacular, but he came up just short of Wilson.

Wilson came into the Hawaiian season needing good results just to stay on tour. His second place at the Reef Hawaiian Pro at Haleiwa, Hawaii, and win at Pipeline were not only enough to rocket him back into the top 15 of the ASP rankings, they also earned him his first Hawaiian Triple victory of his career.

"This is the best day of my life," said Wilson. "I never gave up, I really didn't want Gabriel Medina to win the Pipe Masters in addition to the world title." But Wilson bowed graciously to Medina on the podium, and both competitors hugged in the end.

Brazilian surfers have been competing in world tour events for close to 40 years, but Medina is the first to win events with regularity. He scored three victories on the 2014 tour, including a massive victory in epic surf at Teahupo'o Tahiti over Kelly Slater.

Medina's momentous achievement isn't just a big deal for his country, it marks a tectonic shift in surfing toward a new, younger generation of surf talent. Slater, 42; Fanning, 33; and Joel Parkinson, 33, had won the last eight world titles. Now most bets are on surfers like Medina; John John Florence, 22; and Filipe Toledo, 19, to be leading the charge into the future.

Slater, who was eliminated from title contention today when he went down to Muniz in Round 3, congratulated Medina on Instagram. "With the weight of a country on his shoulders, he made all the right choices to keep his head on straight and achieve his dream," Slater wrote.

Slater will likely compete on the 2015 ASP World Tour, as will Fanning, but it remains to be seen if this year's final day of the Pipeline Masters marks the moment when the youth of the sport took over. 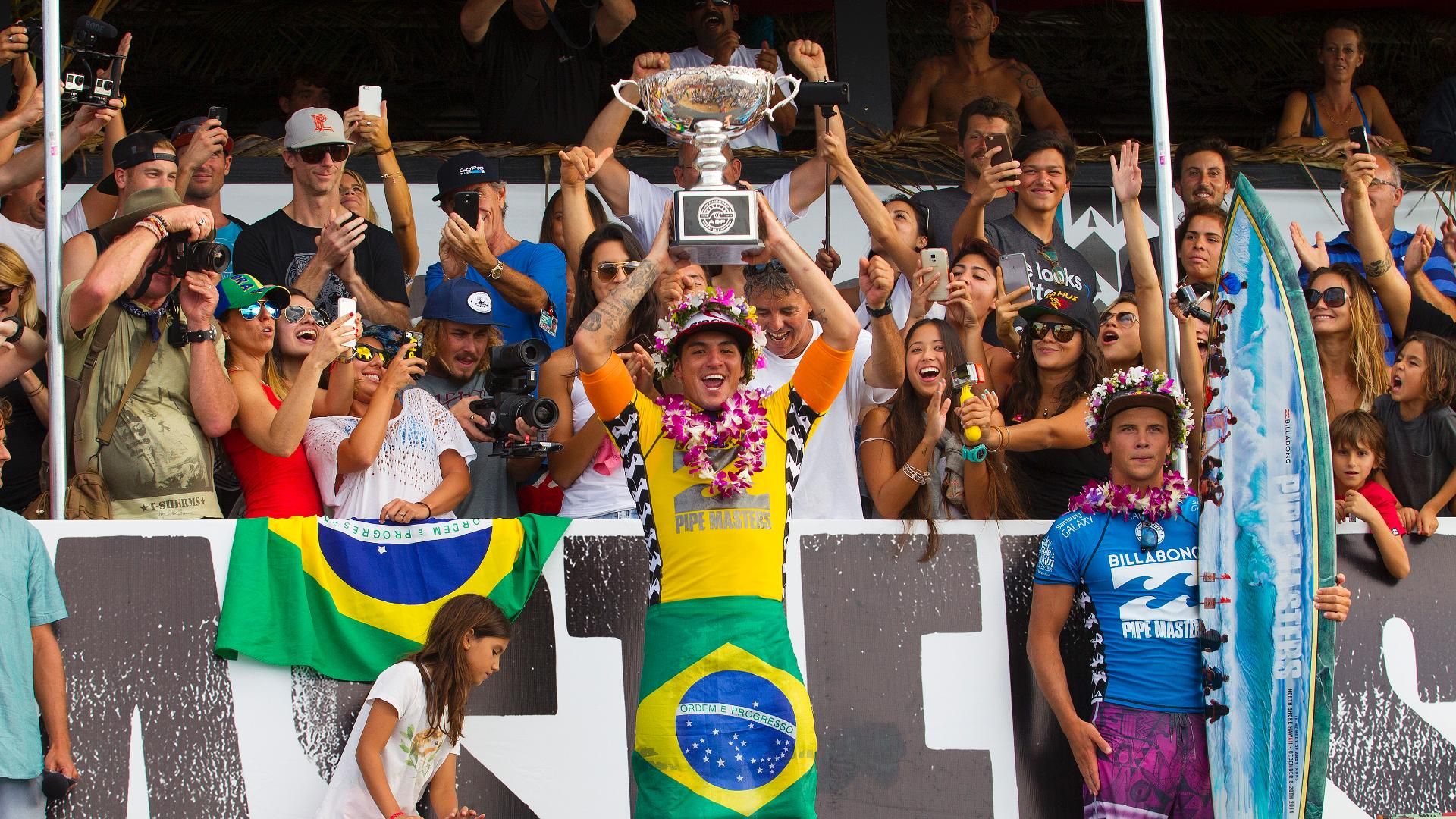