Memphis apologizes to fans over plans to honor John Calipari 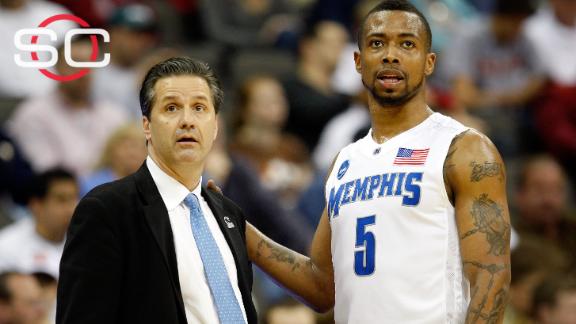 Memphis officials have changed their minds and will not be honoring former Tigers coach John Calipari for his induction into the Naismith Memorial Hall of Fame -- at least not anytime soon.

Just hours after announcing a Dec. 28 dinner to benefit the Tigers and honor Calipari, Memphis president M. David Rudd issued a statement on Twitter saying the university would not be recognizing Calipari.

"I apologize for the unnecessary upset, embarrassment and genuine distress generated by the issue of honoring Coach John Calipari on the occasion of his installation into the College Basketball Hall of Fame," Rudd wrote Thursday.

Rudd first teased the university's plans Wednesday on Twitter, and Memphis announced the dinner benefiting the men's basketball program in a release Thursday morning. Calipari, who is being inducted this weekend in Springfield, Massachusetts, was head coach of Memphis from 2000 to 2009. He led the Tigers to the 2008 national title game in a season later vacated by the NCAA.

Calipari heard of the brewing backlash from a friend and said Thursday in Springfield, before Rudd announced the new plans, that whatever Memphis does is fine with him.

"They gave me a chance to revive my career," Calipari said. "There's many friends that I have there that'll be here, and I'm excited for all the players that are going to be here, and it was a great time. My wife and I have many great friends, so it's good."

The idea of honoring Calipari angered fans still upset that he left for Kentucky and took several recruits with him. Calipari recently recruited 6-foot-11 forward Skal Labissiere from Memphis to Kentucky as a freshman this season.

Fans shared their feelings with Memphis' president. Rudd, who said he read every email and post and responded to every call, wrote he was "deeply troubled" by how upset people were at the idea.

"I recognize this will not end the debate and discussion, but it will put this chapter to rest for our University, fans and community," Rudd wrote.