Wednesday was a good night for slow starts. Louisville was tied with South Carolina Upstate with 13 minutes remaining, but the Cardinals went on to win 76-50. North Carolina trailed Elon by one at the half, but the Tar Heels eventually emerged victorious by the score of 75-61.

Truly, this trend bordered on an epidemic: Memphis spotted Little Rock a 9-0 lead before the Tigers managed to prevail 68-58.

The news that the NCAA has suspended Memphis freshman James Wiseman for 12 games has significant implications for the Tigers, for the American Athletic Conference, and, possibly, for the 2020 NCAA tournament bracket.

As one might expect, Memphis promptly announced that it will appeal the NCAA's ruling. Assuming the penalty stands, however, Wiseman will be eligible to return for the Jan. 12 game against South Florida. (He already sat out both Saturday's blowout win against Alcorn State and Wednesday night's more hard-fought victory over Little Rock. Now, Wiseman would be required to miss 10 additional games.)

The suspension's first potential victim is what could have been an outstanding game between Wiseman-equipped Memphis and current No. 20 Tennessee in Knoxville on Dec. 14. Emphasis on "potential" victim. Who knows, it could still be an incredible game and, indeed, for all we know the Tigers could beat the Volunteers even without Wiseman. But if Tennessee wins (and turns out to be as good as we expect), fans and men's basketball selection committee members alike will be left to wonder whether Memphis missed its best shot of the entire season at a quality win. No other team on the Tigers' schedule is currently ranked in the top 25.

As for what will happen to Memphis in terms of performance, we have to go by the few dozen minutes across three games that Wiseman played before the suspension. His only college experience against non-overmatched competition came in a losing cause against Oregon in Portland, where Wiseman scored 14 points on 5-of-8 shooting and pulled down 12 boards in 22 minutes against the Ducks.

Those are, of course, strong rebounding numbers, but the stat line also reveals that Wiseman accounted for a relatively modest 21% of his team's shots during his minutes. He will become more assertive with his offense against top competition over time, but now that growth will be taking place in January instead of in November. Speaking of January, Tigers coach Penny Hardaway has lost his best offensive rebounder and his most formidable rim defender until then.

To be sure, a Memphis that rolled through the American once Wiseman came back in January could still earn a really nice seed. Moreover, another way of looking at "not many chances for quality wins" would be to say that this schedule looks relatively accommodating for a team that just lost its star.

In other words, the concern for Tigers fans isn't necessarily that the team's seed will plummet now that the freshman is sidelined for the next 10 games. It is instead that Memphis simply won't develop as a team as quickly and to the same extent that the Tigers would have had Wiseman been along for the entire ride. Meantime, Hardaway has 10 games to prove this team is much more than just James Wiseman.

Georgia held on for an 82-78 win at home over Georgia Tech, and before tipoff Rayshaun Hammonds and Anthony Edwards must have agreed to take turns. Hammonds, a 6-foot-9 junior, dominated the first half, scoring 19 points on 8-of-11 shooting from the floor. Then Edwards took over after the intermission. The 6-foot-5 freshman is projected as the No. 2 pick in the 2020 NBA draft, and he rang up 16 points in the second half of what turned out to be a close win.

The Bulldogs had chronic issues on both sides of the ball in SEC play last season, and it's still a little early to gauge UGA's defense. But, on offense, Hammonds is continuing the accurate shooting at a high volume that he showed last season, while Edwards is already distributing the ball as the featured scorer and drawing fouls with regularity. The SEC might find that the Dawgs are scoring with far more efficiency this season.

It took three overtimes Wednesday, but Yale beat Siena 100-89, powered by 25 points from Azar Swain. Remarkably, this marks the third time in just the past 368 days the Bulldogs have reached the century mark against a Division I opponent. In fact, James Jones' men reached triple digits twice last November, hitting the milestone against Memphis (in two overtimes) and Bryant (in regulation). High-scoring hoopsters of New Haven, consider yourselves saluted.

Opportunity knocks, again, for the Hoyas

Georgetown will face Texas in the 2K Empire Classic at Madison Square Garden on Thursday night, and the game will afford Patrick Ewing's group a chance, we think, to record one of those quality wins we'll be discussing all through February and into March. The Longhorns project to be a team that will go .500 or better in the statistically robust Big 12, and a victory on a neutral floor against Shaka Smart's men would be a nice bullet point on Georgetown's team sheet when bubble watching begins in earnest. Still, there's a twofold question to be answered before we get that far. First, can the Hoyas really win, and, second, will they be in a position in three months for such a game to matter?

On paper, a rotation built around NC State transfer Omer Yurtseven, Mac McClung and last season's Big East freshman of the year, James Akinjo, has at-large potential. The Hoyas were picked to finish sixth in the league at Big East media day, but polled just one point behind both Marquette and Providence. Simply put, the expectation is that this team will contend for a tournament bid, and, indeed, Yurtseven has looked dominant on the boards at both ends of the floor. Then again, the Hoyas were thrashed on their home court last week by Penn State 81-66 in the team's first test of the season against a quality opponent.

This offense has shot just 7-for-31 on its 3s over the past two games, and Ewing's "big three" of Yurtseven, McClung and Akinjo is, so far, attempting more 2-point jumpers (50) than shots at the rim (45). In other words, performance has not quite aligned with the expectations just yet for Georgetown. The game against the Horns is therefore a welcome and needed opportunity for Ewing and his team to make that happen.

The ACC's 'other' defensive dynasty

Speaking of the 2K Empire Classic, the nightcap at the Garden on Thursday will pit Cal against Duke. Virginia gets the lion's share of the adoration in the ACC for great defense, naturally, but Mike Krzyzewski's program has been having a pretty good run of its own on that side of the ball the past couple seasons. That's doubly impressive because the Blue Devils, like Kentucky, churn through players at a rapid rate as ex-Devils move on to the NBA. Nevertheless, Duke has held its ACC opponents to just 0.97 points per possession over the past two seasons, a time period in which, on average, the league was scoring something closer to 1.03 or 1.04 points per trip.

Now, this latest Duke team is giving signals -- early and tentative ones, granted -- that it might be up to the task of carrying on this tradition. Tre Jones knows his way around defense, to put it mildly, and the eye-popping Kansas turnover rate in the season's first game (35%) turns out to have presaged a not-eye-popping but still very high giveaway rate recorded by the Blue Devils' three subsequent opponents (24%). Who knows, Vernon Carey might turn out to possess a valuable combination of shot-altering and defensive rebounding skills. When it comes to Duke this or any season, there will be plenty of attention paid to draft stock, perimeter range and optimal lineups for scoring. Just remember to keep one eye on the Blue Devils' defense. It might be pretty good.

Is Josh Carlton really going to be the hardest-working man in high-major hoops this season?

Going into Thursday's contests, no player from Division I's top seven conferences had recorded a higher number for possession usage at KenPom.com than Connecticut's Josh Carlton. After the Huskies' first three games, the 6-foot-11 junior was using fully 37.6% of his team's possessions on offense while he was on the floor. That number, in turn, is driven by three factors: Carlton shoots often (all 2s), he's tenacious on the offensive glass and the UConn star is fouled with a high degree of regularity.

The most recent big man to carry an exceptionally high number for possession usage, Wisconsin's Ethan Happ, additionally had assists to thank for his preeminence in the workload category. Conversely, Carlton appears to be on track to function as a true throwback, a featured scorer who carries the offense through post moves, putbacks and foul shots, period. On Thursday night, you can watch him do all of that against Buffalo in the Charleston Classic in Charleston, South Carolina. 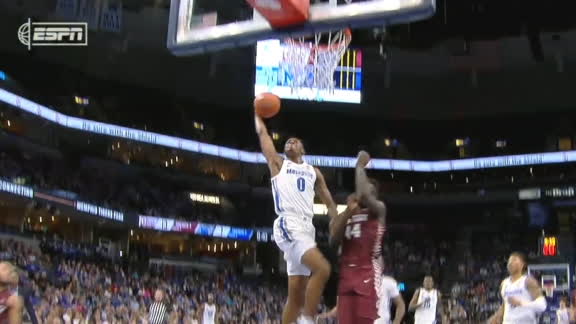 Memphis' Jeffries rocks the rim
D.J. Jeffries gets the ball off the Memphis steal and throws down a thunderous slam. 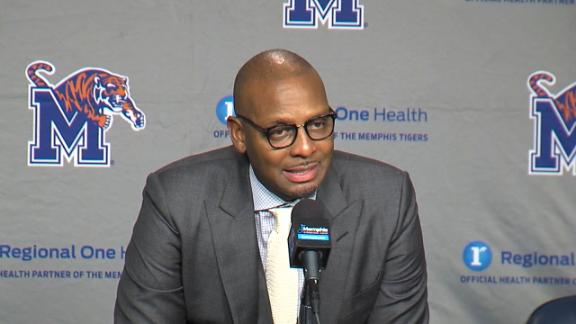