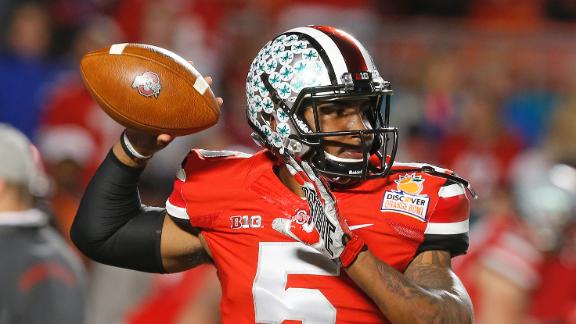 Rumors of a possible Miller transfer have been circulating and have intensified in the past few days. The Palm Beach Post, citing a source close to the Florida Statefootball program, reported Tuesday that Miller had shown interest in transferring to the school.

Miller also has been linked to Oregon, Ole Miss and Duke, according to the newspaper.

The two-time Big Ten offensive player of the year has been out all season with a torn labrum in his throwing shoulder. His replacement, J.T. Barrett, finished fifth in the Heisman Trophy voting despite breaking his ankle against Michigan on Nov. 29.

Third-stringer Cardale Jones led the Buckeyes to a 59-0 win over Wisconsin in the Big Ten championship game and will start the College Football Playoff semifinal against Alabama at the Allstate Sugar Bowl on Thursday night.

In his final news conference before the Sugar Bowl, Meyer said Wednesday that he's had "conversations" with Miller and that "I expect him to be back at Ohio State."

Buckeyes athletic director Gene Smith also told Cleveland.com that he expects Miller to stay in Columbus, saying: "I don't see a need for him to transfer. I have never heard that from him."

Miller earned his undergraduate degree from Ohio State earlier this month and would be eligible next season at another school as a graduate transfer. Jones is a sophomore, andBarrett is a redshirt freshman.