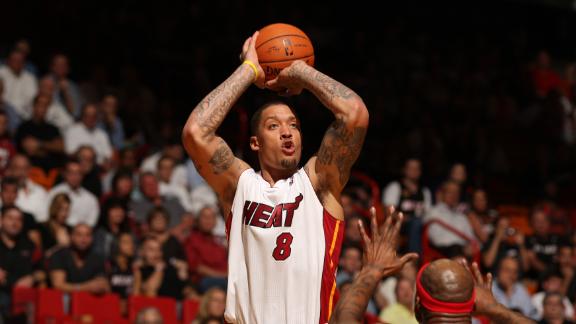 MIAMI -- Looking for help for the stretch run, the Miami Heat turned to a familiar face.

Michael Beasleyis with the Heat for a third time, signing a 10-day contract on Thursday with the team that drafted him with the No. 2 overall pick seven years ago.

He said returning to the Heat feels "like I never left, honestly."

Beasley participated in an optional practice in New Orleans on Thursday, working on his shooting and adding a soaring one-handed dunk before walking off the court. He expects to be in uniform against the Pelicans on Friday night.

"I feel great," Beasley said. "I'm definitely blessed and humbled for yet another opportunity and I'm ready to take it by storm."

Beasley's addition comes less than a week after the Heat learned they would lose All-Star forward Chris Bosh for the remainder of the season because of blood clots on a lung. Miami (25-31) entered Thursday in the No. 7 spot in the Eastern Conference standings.

Beasley spent this season in China, putting up monster numbers including a 59-point performance in his league's All-Star game. He said he's returned to the NBA a wiser, more patient player who has emphasized trying to "slow down, let the game come. I focus on trying to make the whole group better."

He has been working out in Miami for several days, even practicing in the team facility -- a courtesy that the team extended to him, and a sign that yet another Beasley reunion could be looming.

Now it's official, with Beasley wearing a team T-shirt as he signed his contract on Thursday.

Beasley spent his first two seasons in Miami, then was traded to Minnesota in the summer of 2010 as one in the series of moves that ultimately allowed the Heat to bring Bosh and LeBron James in to play alongside Dwyane Wade.

Beasley has been a proven scorer, and that's something that Miami needs. The Heat rank 28th in scoring in the NBA this season, though their offensive pace has picked up since acquiring point guard Goran Dragic from Phoenix last week. Beasley said he expects he'll have opportunities to be more aggressive than he was in his last stint with Miami because of LeBron James' decision to return to Cleveland and Bosh being sidelined.

Beasley and Dragic were teammates in Phoenix two seasons ago. Beasley also played with Henry Walker at Kansas State.

Walker said he told Beasley: "You got to come back and remind people why you were the No. 2 pick."

"He's immensely talented," Walker added. "He can do a lot of things and I think it's going to be good for him."

Beasley averaged 19.2 points in his first Minnesota season, then declined in his second year there and eventually ended up in Phoenix. He and the Suns parted ways after 75 games and the Heat brought him back last season.

Beasley appeared in 55 games for Miami in the 2013-14 season, averaging 7.9 points. He made four more appearances in the playoffs.